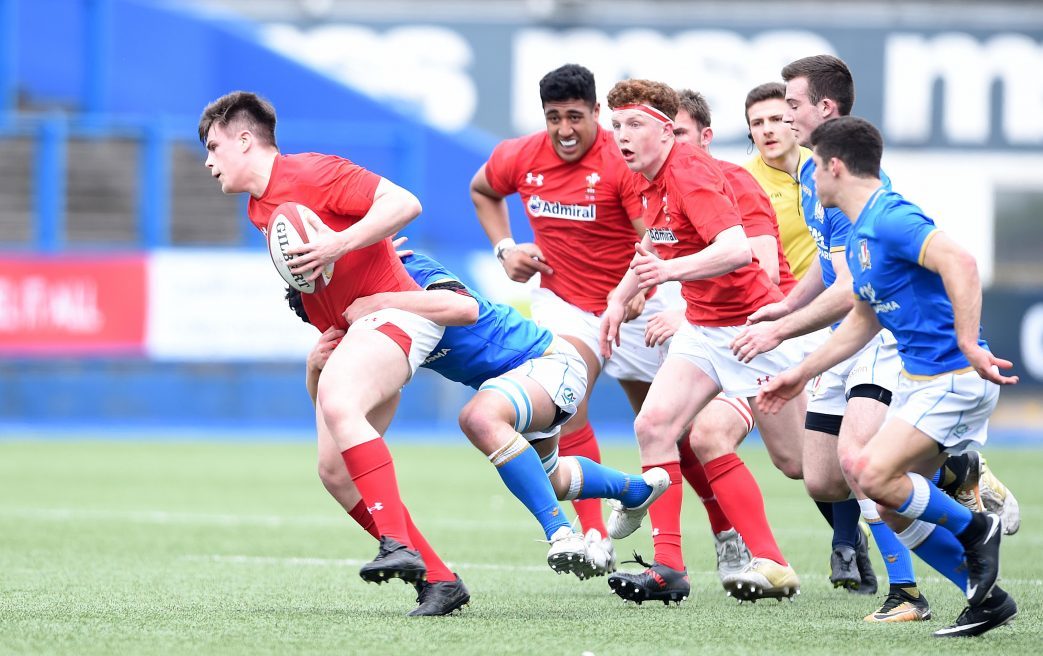 The inaugural U18 Six Nations Festival comes to a conclusion at Cardiff Arms Park on Sunday, 8 April, with Scotland looking to make a clean sweep of their three games and England seeking to avoid a whitewash.

The young Scots have been the surprise package of the Festival and they will open the final round with a game against Ireland School U18 at the Arms Park.

Wales will be hoping to make it two wins from three games when they host a very physical Italian team that beat England on Wednesday. The final game sees France face England.

U18 Six Nations Festival – Round 3

Iain Monoghan’s Scottish team will be looking to make it a triple triumph to end their campaign on the highest of highs following wins over England and France.

“It was the first time at Under 18s level that we have beaten France. We have really put a lot of emphasis on doing well at this level as it is a vital stepping stone to the Under 20s and ultimately professional rugby,” said Monoghan.

“We will focus on ourselves and we know if we can hit our best form then we have every chance of beating Ireland. It is fantastic to be playing at the Arms Park where some of rugby union’s true legends have played in the past.”

Campbell College prop John McKee takes over the captaincy of the Irish Schools side as one of seven changes up front, two of them positional, from the side that were beaten by Wales in midweek. There are also four changes behind the scrum, with Round 1 matchwinner Nathan Doak returning at scrum half.

“I am very happy with how my players are developing. Age grade rugby, and pushing through to the professional game, is a tough learning experience, but these boys are in a good position to kick on,” said Irish coach Mark Smyth.

“We are putting a lot of emphasis on developing these guys into good all-round rugby players. Despite the defeat to Wales, we showed a lot of character and that gives me a lot of hope.

“Scotland are a very strong side who have a powerful set piece and we will have to be at our best to beat them. This Festival has been a fantastic experience for the boys and it is very important for us to finish on a high.”

The power-packed Italians gave away three penalties in the closing few minutes of their opening game to given Ireland a hat-trick of chances to win the game 20-17.

If that was a kick in the teeth for them, they didn’t show it as they recovered to beat England in Round 2. Now they will be looking to make it two wins from three with a victory over Wales to add to their collection.

Centre and skipper Matteo Moscardi starts his third game in a row, while first choice half-backs Ratko Jelic and Luca Borin return. Moscardi scored a try and picked up the man of the match award in the game against Ireland.

Wales head coach Chris Horsman has given 16-year-old Carwyn Tuipulotu another chance to shine at No 8 after his battling display against a giant French pack. He is joined in the back row by Olly White and Rob Brookson.

Lock Teddy Williams and wing Louis Rees-Zammitt are the only two Welsh players to start in all three matches and the captaincy switches from Jac Morgan to hooker Will Griffiths. Morgan is included among the replacement sand should get some game time.

“Italy had a brilliant result against England and they’re clearly a great unit. We have a lot to work on and improve to beat them,” said Morgan.

“Each team is different, Ireland were less physical than France, we just have to take everything and learn from it ahead of Italy.”

After two agonising defeats, England U18 head coach John Fletcher will be hoping his side can finish off their chances when they wrap up their campaign against France.

There are nine changes to the side beaten by Italy with backs Reece Dunn, Jack Reeves, Jacob Morris, Manu Vunipola and Blake Boyland returning. Prop Bevan Rodd and hooker Alfie Barbeary are included in the front row, with lock George Martin also returning, while flanker Rob Farrar comes into the back row.

“I want to see them play for the full 70 minutes. In patches we’ve been good both sides of the ball but we have lacked consistency and we have been in and out of the game far too much,” said Fletcher.

“We are going to need to play for 70 minutes against France as they are probably the best team in the Festival. We played them early in our season and although the game was quite even I was impressed with their play.

“The players have worked really hard over the past week. It’s a really good opportunity for us to end the Festival on a high with a really positive performance.”

Giant French No 8 Jordan Joseph, the try scoring man fo the match from their win over Wales, returns to the back row to add more power to the French pack. His battle with England’s 19 stone No 8 Rus Tuima should be one of the highlights of the round.