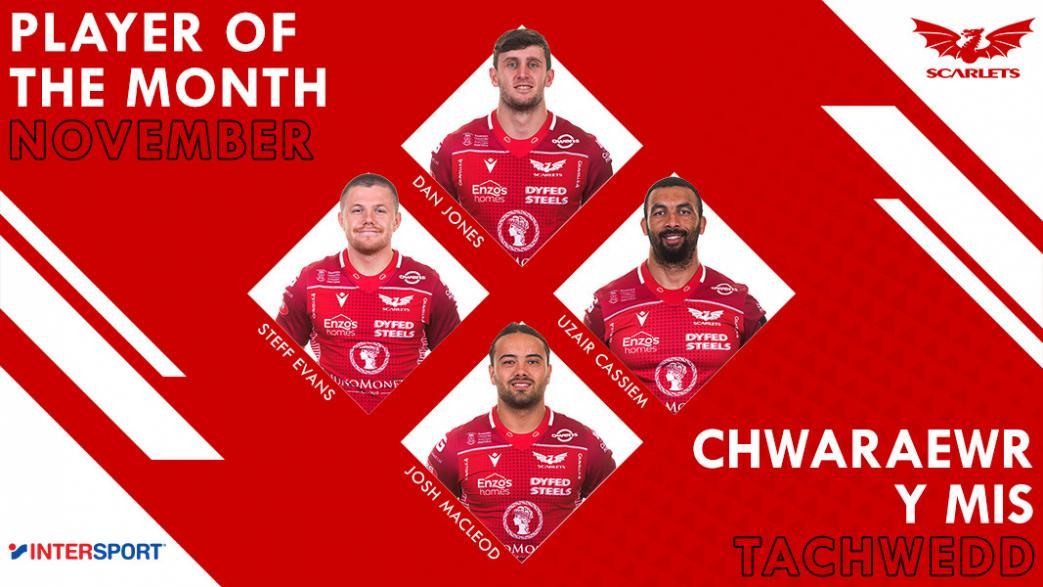 After a busy November of Guinness PRO14 and European Challenge Cup action, voting is open for the Scarlets player of the month award, sponsored by Intersport.

Each month we are putting forward a four-man shortlist of players and it was scrum-half Kieran Hardy who came away with the award for October.

Since then we have enjoyed home wins over the Toyota Cheetahs, Benetton and London Irish, a narrow European defeat out in Toulon and a loss to in-form Ulster in Belfast last weekend.

Here’s a few details on their performances so far this season.

Josh has been a model of consistency in the opening two months of the campaign and currently leads the overall PRO14 turnover charts. Man of the match in the win over the Cheetahs in Llanelli, he also produced a couple of brilliant defensive moments in a battling display in Toulon.

Cass has become a firm fans favourite at Parc y Scarlets on the back of a string of wholehearted displays in the Scarlets’ back row. He has carried more than any other player in the PRO14; a reliable line-out target, he has also been a big part of the side’s defensive effort.

Steff has earned a recall to the Wales squad on the back of some sparkling performances for the Scarlets. Crossed for a try against the Cheetahs in his 100th appearance and showed his poacher’s instinct to claim another as part of a man-of-the-match display against Benetton. Only three players have beaten more defenders than Steff in the opening seven rounds of the PRO14.

The fly-half has been an assured presence in the No. 10 jersey this season. Kept his nerve to land a brilliant last-gasp penalty to secure the win over Benetton and came off the bench to kick a penalty and a sweet drop-goal – his first in a Scarlets jersey – in Toulon. Closing in on a century of appearances and 500 points for the Scarlets and still only 23 years of age.