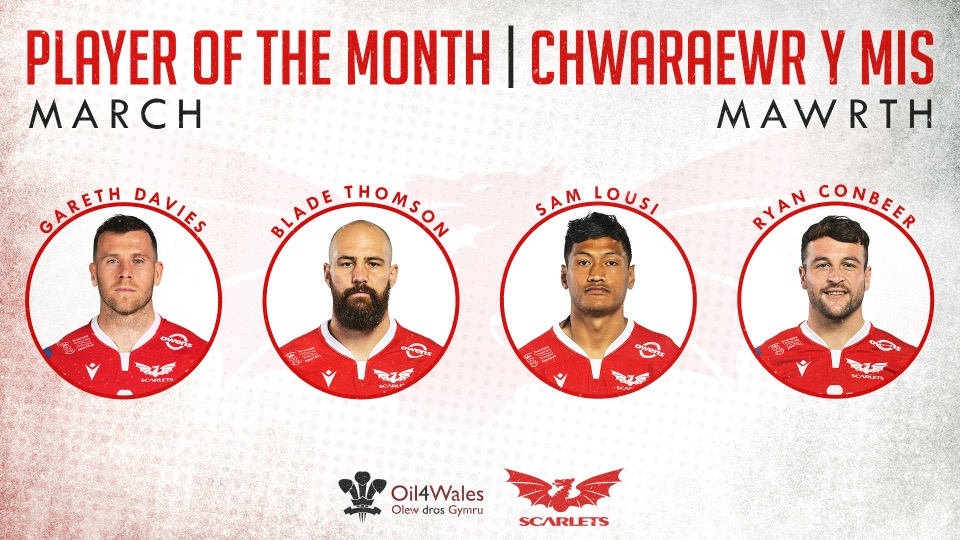 It’s time for you to vote for your Oil 4 Wales Scarlets Supporters Player of the Month for March.

It’s been a mixed bag of results in the United Rugby Championship for Dwayne Peel’s side with wins over Glasgow Warriors and Zebre sandwiching defeats in South Africa to the Cell C Sharks and Vodacom Bulls.

Here are the contenders for this month’s award. You can vote by going onto our Twitter page or Instagram stories and choosing from one of these four players.

The winner will be announced on Friday.

The experienced Wales international scrum-half delivered an outstanding try-scoring performance in the home win over Glasgow and followed that up by returning from Six Nations duty with a player-of-the-match display in the win over Zebre.

The winner of the January award has continued to maintain his lofty standards with a string of outstanding displays and has won the official supporters club player of the match vote for the last three games. Rewarded with a try against Zebre and set up two against the Sharks.

The back-rower returned with strong performances across the month, particularly in the backs-to-the-wall efforts in South Africa. One of the Scarlets’ leading tacklers this season, Blade has the most turnovers and has made the joint most number of offloads.

The in-form winger crossed wide out for tries in the wins over Glasgow and Zebre, underlying his scoring prowess. There’s also been a new contract announcement as well. It’s been a good month for the 23-year-old.