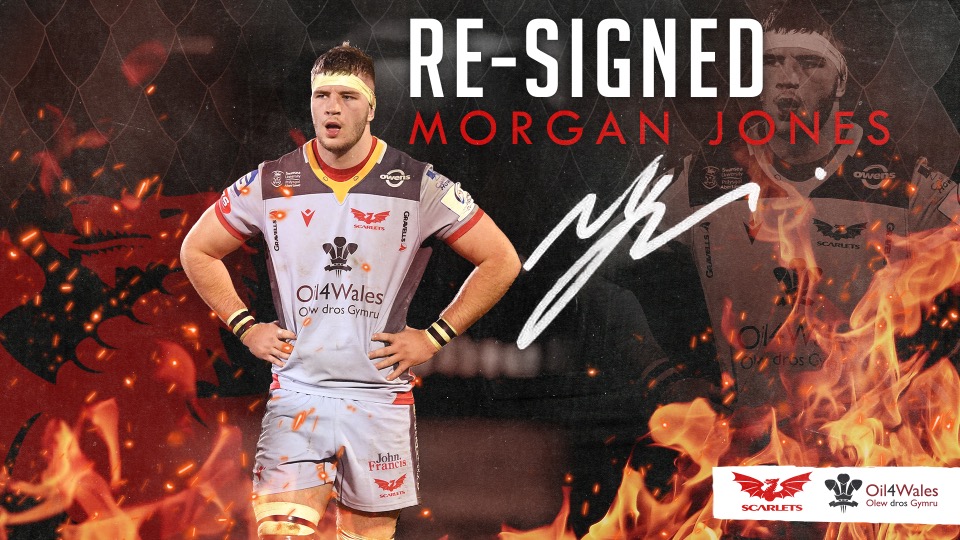 Second row Morgan Jones has become the latest young player to sign a contract extension with the Scarlets.

The 21-year-old has enjoyed a breakthrough season at Parc y Scarlets, featuring in 11 competitive matches, including the Champions Cup win over Bath when he produced a late try-saving tackle to help secure a memorable victory.

The 6ft 7in lock was born in Nuneaton, but qualifies for Wales through his grandfather, who was born and bred in Llanelli. He joined the Scarlets Academy in 2017; has been capped for Wales U18s and was a member of the Wales U20s side that beat New Zealand at the 2019 Junior World Championships in Argentina. Jones made his senior Scarlets debut in a pre-season match in Jersey a couple of months later.

Scarlets head coach Glenn Delaney said: “Morgan has played something like 640 minutes for us this year, which he probably wouldn’t have expected at the start of the season. He has proven he can make the step up in the PRO14 and also in Europe, where he was outstanding coming on for Jake against Bath. He is one of a group of exciting young players who we believe have big futures in the game.

“He is still young, but he is someone who is looking to get better every day. We are hugely excited by what he can achieve.”

Morgan said: “I supported the Scarlets as a kid so to be playing for them now and running out with players I grew up watching is a bit surreal to be honest.

“It has been great for me to get so many games under my belt this season and also to have played alongside boys who I have come through the Academy and the 20s with.

“I know how important it is not to look too far ahead, it is about working hard to improve my game; keep learning off the senior players, who have been a big help, and taking my opportunities when they come.”