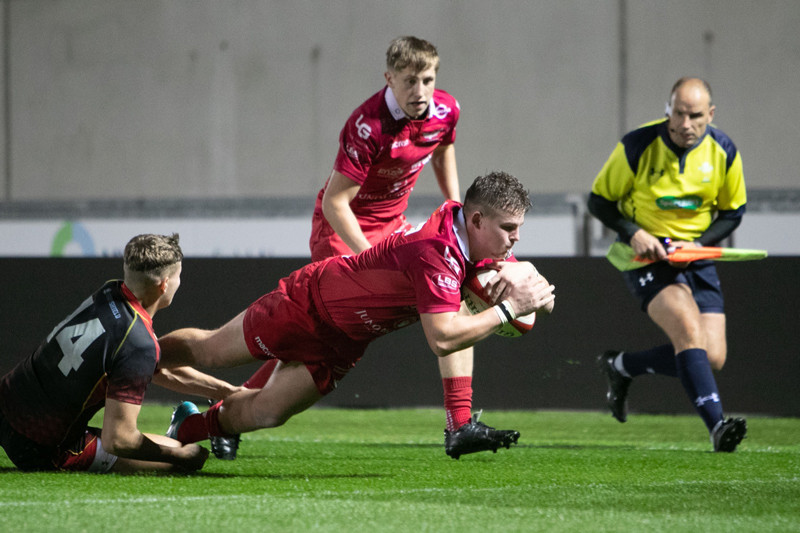 Scarlets Under-18s maintained their winning ways with a hard-earned 29-17 victory over Dragons at Parc y Scarlets.

Tries from No. 8 Leon Samuel and prop Sam O’Connor, combined with a penalty and conversion from the boot of full-back Alex Wainwright, had given the home side a 15-7 advantage at half-time.

The Dragons proved stubborn opponents, but further scores from hooker and captain Morgan Macrae and wing Dylan Richards (both converted by fly-half Jac Tregoning) sealed a third successive victory in the Regional Age Grade Championship, backing up wins against Ospreys (22-12) and RGC (19-15).

On a busy night for the Scarlets Academy, the Under-16s East and West sides were also in action.

The East side, playing on the Parc y Scarlets training field, were level 7-7 at the break against Ospreys West thanks to a try from centre and skipper Iestyn Gwiliam. But it was the visitors who pulled away in the closing stages to secure a 21-7 win.

At Ystrad Mynach, the West side took on Dragons Black and looked well placed when they led 12-0 at half-time following tries from prop and captain George Rossiter and wing Harry Fuller.

However, the Dragons produced a powerful second-half display to take the spoils 27-17 with centre Dafydd Jones adding a third try for the young Scarlets.

The Regional Age Grade Championship will resume in January.