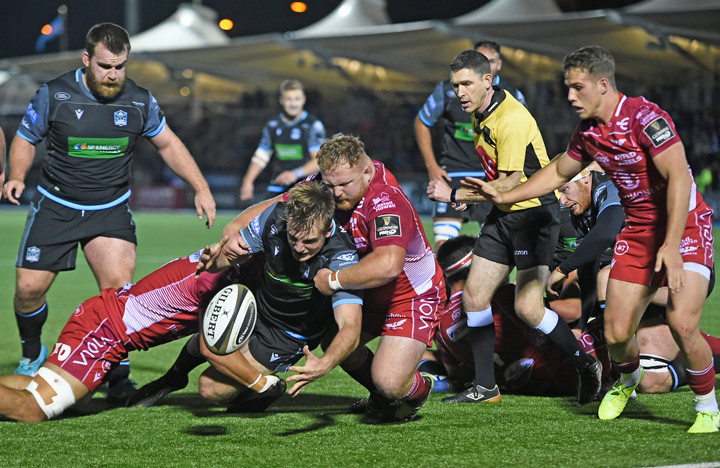 Scarlets head coach Brad Mooar praised the character and desire of his players after they made it two wins from two in the Guinness PRO14 thanks to a nail-biting 25-21 victory over Glasgow at Scotstoun.

The win was based on a disciplined defensive effort and a clinical edge that saw the Welsh side run in three tries in a game-defining eight-minute period early in the second half.

But as Glasgow threatened to snatch the game at the death, the visitors also needed to dig deep to keep their line intact.

“We left a few points out on the field, but what it did give us was an opportunity to show our character ,” said Mooar. “There was a real want by the players to player for each other and defend that line at the end.

“I thought our defence all evening was outstanding. We created opportunities through our line-speed, our maul defence was strong and then the heart we showed on the line was just outstanding. Glenn Delaney and Dai Flanagan have been doing some great work around that with the forwards and backs.”

Mooar added: “We expected a response from Glasgow after their result against the Cheetahs the previous week, they are a better side that that and the Cheetahs are an outstanding team as well. I know Dave (Rennie) really well, I know he would have had them biting at each other’s ankles and going for it during the week to bring some real physicality, but we are a physical team as well.

“There was an awesome window of play for us in the second half to take those three opportunities. One from an errant kick, and another from linespeed on D with Steff kicking through and finishing with real composure. It is great to see him expressing himself on the field and enjoying his rugby. That is what I am seeing from the group.”

After successive wins over Connacht and Glasgow, Scarlets now turn their attention to the challenge of Italian side Zebre, who they face at Parc y Scarlets next Saturday afternoon (3pm kick-off).

Mooar added: “The group are enjoying playing for each other and I am loving watching them.

“We will review this game really hard and will prepare well for Zebre next week. We would love to fill the stadium, so Scarlets fans come and support your team!”