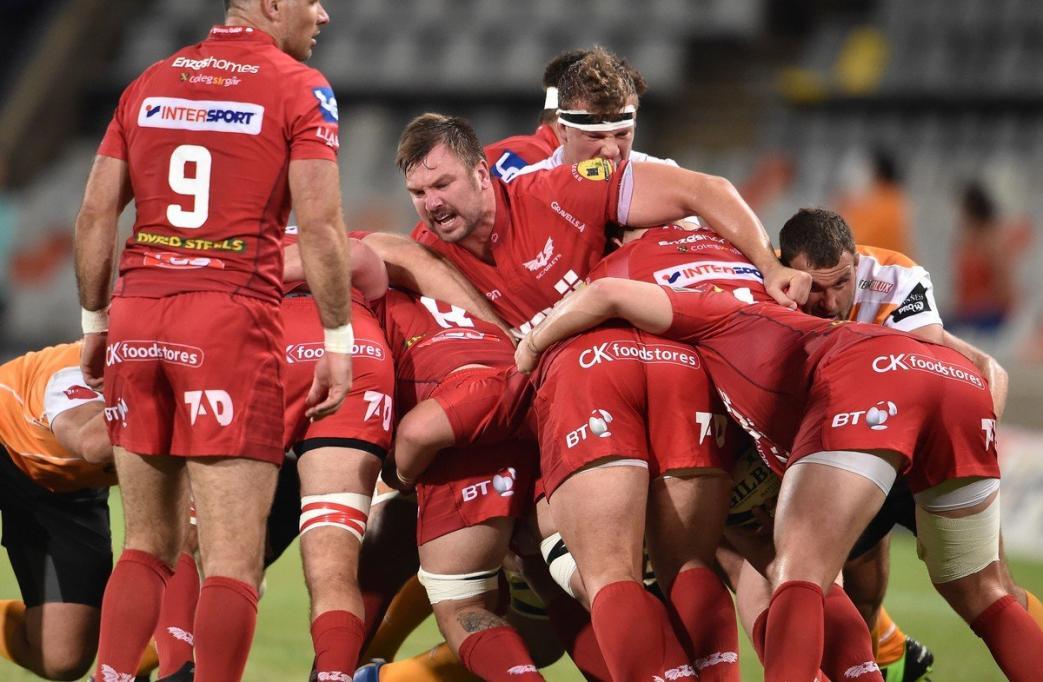 The Scarlets headed into their second game in South Africa on Saturday evening against Cheetahs at the Free State Stadium.

With a victory and five points from the opening game against Southern Kings the Scarlets sit top of the Conference and any score from the second game would be a bonus for the regional side.

The young Scarlets side put in a great performance against the Cheetahs in adverse conditions at altitude but keep fighting to claim the losing bonus point making it six points out of a possible ten on the South African tour.

Scarlets get the game underway with a penalty from outside half Dan Jones as the visitors work their way into the Cheetahs territory with the homeside put under pressure after multiple infringements.

Just minutes later Cheetahs hit back with a penalty of their own to bring the score level after hooker Ryan Elias is penalised offside at the ruck. It’s a solid hit from outside half Fred Zeilinga and it’s over.

Fifteen minutes in and Cheetahs score a second penalty through outside half Zeilinga. Will Boyde knocks the ball on as it slips through his hands. Cheetahs’ strong scrum puts the Scarlets under pressure and it allows them to kick for goal for a second time.

Scarlets head downfield from a Jones corner kick. A line out gives Scarlets an attacking opportunity. Paul Schoemer is penalised for coming in from the side at the ruck giving Jones a second chance at a penalty. He makes no mistakes and bring s the Scarlets back equal.

Scarlets keep the pressure on Cheetahs and push them back in to their own half from the restart but it’s not long before scrum half Shaun Venter gets hold of the ball and he puts peddle to the mettle. He’s away down field with Johnny Mcnicholl having to track from in-field. He gets his arms around him just in time and bundles him in to touch. A huge try saving tackle from the New Zealander!

Cheetahs get their try however as we reach 25 minutes on the clock. The Scarlets are on the attack in Cheetahs territory but former Scarlet Rynier Bernardo reads Dan Jones’ pass back inside and intercepts. He knows he hasn’t got the pace to go himself so puts boot to ball with centre William Small-Smith in support on the chase. He gives it a budge with the boot before gathering and crossing the whitewash. Zeilinga adds the conversion.

With only six minutes remaining in the first half Scarlets are penalised inside their own half giving Zeilinga another opportunity to kick for the posts. He strikes it sweetly from the 10 metre line and adds an important three points to his side’s score.

Tadhg Beirne starts a wonderful move for the Scarlets on the near side which results in a try for openside flanker James Davies who makes his return to action. Beirne throws the ball back inside as he’s tackled, Elias gathers from the ground and it’s head down to the defensive line for him. The ball is recycled, shipped along the attacking line with the men in red seeing that there are numbers out wide. Davies hits a wonderful angle, runs through Cheetahs defenders and he’s over the line!

Cheetahs are on the attack early, they win a penalty and opt to kick for the corner rather than go for three points. Scarlets win the ball at the lineout clearing the homeside away from the tryline.

Scarlets hit back and a great drive by the forwards and work by Elias sees Jones kicking a penalty to the corner. A cross-field kick is intended for Prydie to collect but the kick is too strong and heads straight into touch. Like the Cheetahs Scarlets leave the 22 pointless.

Things liven up after 50 minutes of play. Jones does exceptionally well to keep hold of an interception ball before his side wins a penalty as Cheetahs are penalised for not rolling away. The attack is on but Cheetahs turnover the ball and head downfield. They’re in Scarlets 22 from a long range kick. Mcnicholl gets there in time, passes back inside to Ioan Nicholas. We lose possession once again before the forwards regain their footing and the ball. Cheetahs are penalised and it’s a Scarlets scrum five.

Five minutes later Cheetahs’ scrum holds strong and pushes the Scarlets off their own ball. It’s another opportunity for Zeilinga to go for goal but it doesn’t hit its mark.

As we edge towards the hour mark the Cheetahs cross the line for a second try but it’s not given following a forward pass earlier on in the move.

They do cross however a minute later with winger Craig Barry running a wonderful individual move to cross for a try. He dances through Scarlets’ defensive line and crosses unopposed under the sticks. Zeilinga adds the conversion.

Scarlets answer the try with a wonderful move of their own with winger Ioan Nicholas scoring an almost carbon copy of Barry’s try just four minutes ago. He darts around Cheetahs’ defenders and scores under the posts. Jones adds the conversion.

Cheetahs are on the attack, they look dangerous with ball in hands. Scarlets defensive line holding strong but Barry crosses out wide for his second try. Zeilinga doesn’t manage to convert the try keeping the Cheetahs ten points ahead of the Scarlets with ten minutes remaining.

Herschel Jantjies and Ioan Hughes replace Mike Phillips and Dan Jones. Taylor Davies and Josh Macleod replace Ryan Elias and Will Boyde. The injection of youth and fresh legs on to the field has given the Scarlets a spark in the closing ten minutes.

A penalty inside Cheetahs’ half sees Tom Prydie step up to bring the Scarlets back within seven points.

Cheetahs have an opportunity to come back but a kick to touch doesn’t edge close enough to the try line and the whistle is blown leaving the Scarlets with a very important and hard-fought losing bonus point.

The Scarlets headed into their second game in South Africa on Saturday evening against Cheetahs at the Free State Stadium.