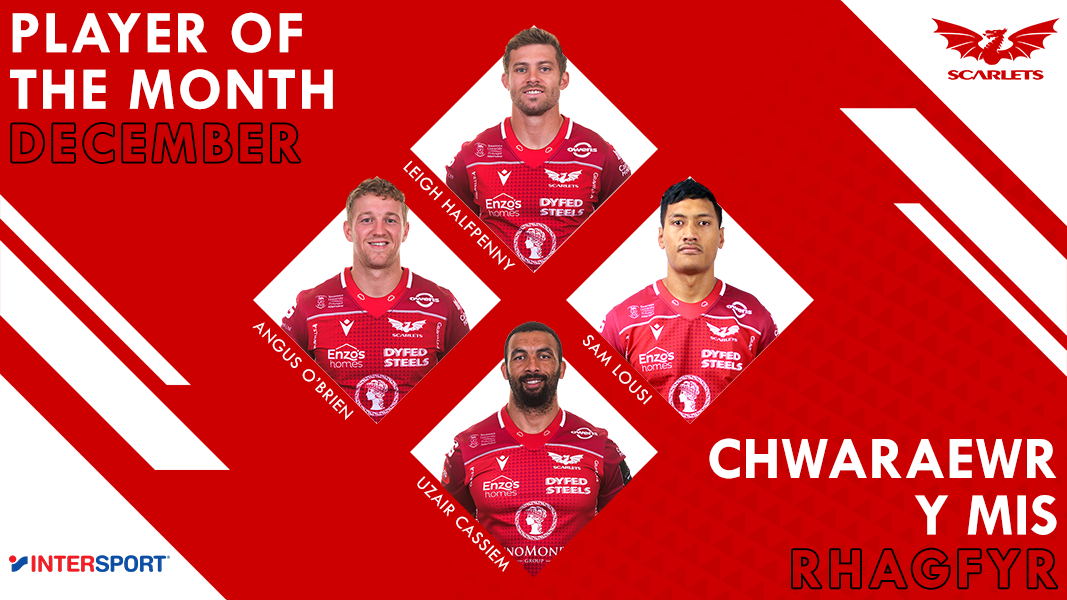 It’s player of the month time and here are your four nominees for December!

With a European double over Bayonne, Scarlets remain firmly in the hunt for qualification for the Challenge Cup quarter-finals, while the side bounced back from a last-gasp Guinness PRO14 defeat to the Dragons with a thumping 44-0 Boxing Day victory over the Ospreys.

In conjunction with the coaching team, we have picked out the four players up for the December award.

Leigh returned from World Cup duty away in Bayonne and it was as if he’d never been away, landing some crucial kicks as the Scarlets claimed their first win on French soil in five years. Solid and assured under the high ball, he has been a threat on the counter and crossed for a try in the home win over Bayonne.

The fly-half has been a revelation since stepping into the No. 10 jersey, picking up man-of-the-match awards in both his December appearances against Bayonne and Ospreys. Became the first player in the PRO14 this season to deliver a hat-trick of try assists during the Boxing Day victory.

The Tongan second row has hit the ground running since his arrival in Llanelli and has been at the heart of a powerful pack effort. Started in all four matches in December. Head coach Brad Mooar singled out his performance in defeat at the Dragons and he followed that up with a rampaging display against the Ospreys.

Cass makes the shortlist for the third successive month. Man of the match in the away win in Bayonne, he has continued to keep the bar high and is one of the leading carriers in the PRO14 and Challenge Cup.