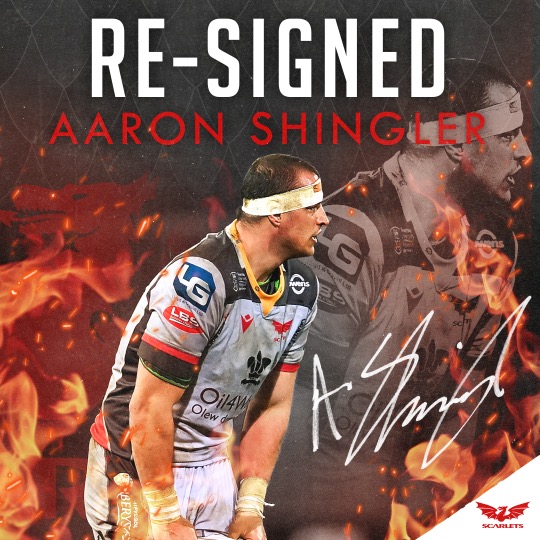 The Scarlets are delighted to announce that Wales international back-rower Aaron Shingler has signed a new contract.

Shingler made his long-awaited comeback from a health issue against Munster earlier this month and notched up his 191st appearance and 21st try in Scarlets colours against Connacht on Monday night.

Man of the match in the Guinness PRO12 final in Dublin in 2017, he has won 27 caps for his country and was a member of the Wales squad that reached the 2019 Rugby World Cup semi-finals in Japan.

The Hendy product, who had previously played first-class cricket for Glamorgan, made his Scarlets debut in 2009 after shining for Llanelli RFC in the Welsh Premiership. He has been a mainstay of the Scarlets side ever since, establishing himself as a dynamic ball-carrier and one of the leading line-out forwards in Welsh rugby.

The 33-year-old said: “It has been a tough year getting back to full fitness and I have had incredible support from my family and the club to help me through it. I can’t thank the medical team at the Scarlets enough.

“It has been brilliant to be on the field with the boys again these last two weeks and last night’s win showed the character we have in the squad. Being in the Champions Cup is where we all want to be.

“Signing a new contract with the Scarlets was an easy decision. Pulling on the Scarlets jersey means a huge amount to me having been here for over 12 years. We have a strong squad; competition across the board with a good mix of experience and youth and as a group we have ambitions to be competing regularly with the best in Europe. I am looking forward to what lies ahead.”

Scarlets head coach Glenn Delaney added: “Aaron is one of the heartbeats of this Scarlets squad, respected by everyone and a player who demands high standards on and off the field.

“His record as a Scarlet speaks for itself. He’s been here for 12 years and has close to 200 appearances, he understands the culture and values this club stands for and that legacy is crucial in the role he has to play with the group of young players we have here.

“Aaron is also a competitor and a pretty resilient character, as he’s shown coming back from a serious knee injury to play in the Rugby World Cup and again this season to get back to fitness after a tough eight months or so. It’s fantastic that he has signed a new contract as we look to push forward with this group of players over the next few years.”