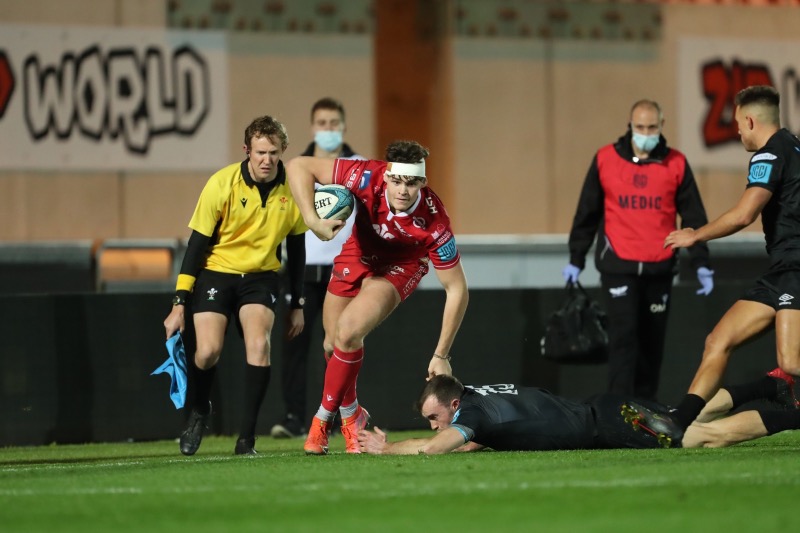 Ospreys A took the spoils at Parc y Scarlets after seeing off Scarlets Development 33-10 in a match that saw a host of youngsters from both sides given opportunities.

The visitors produced a clinical performance, pouncing on Scarlets errors, particularly in the first half.

Scarlets kept on playing, though, and did claim a deserved second-half try through young back Eddie James.

While the Ospreys were comfortable winners in the end, the Scarlets youngsters will have gained plenty from the experience in front of a decent crowd at Parc y Scarlets.

It was the Ospreys who were over for the opening try after just six minutes with centre Callum Carson benefiting from a cut-out pass after a period of pressure on the home line.

The visitors were celebrating a second when flanker Will Hickey pounced on an overthrown line-out and with full-back Cai Evans converting both the Ospreys surged into a 14-0 lead.

A powerful carry from No. 8 Carwyn Tuipulotu almost brought a first Scarlets score, but an infringement in the shadow of the posts halted the attack.

With the Ospreys line-out causing the Scarlets problems, the men in black had a third try on 35 minutes through impressive flanker Harri Deaves, again converted by Evans.

Scarlets looked dangerous when they did keep ball in hand and an attack from inside their own 22 led to a long-range penalty strike from Rhys Patchell on the stroke of half-time.

The home side started the second half with plenty of adventure and with skipper Joe Roberts to the fore they went close on a couple of occasions.

However, the Ospreys were able to force a couple of turnover penalties at the breakdown and the chances went begging.

Former Scarlet Osian Knott and Tuipulotu were both yellow carded for illegal tackles as both sides emptied their bench in the second period.

And it was the visitors who picked up their fourth try midway through the half through fly-half Josh Thomas.

Scarlets, to their credit, kept pressing and eventually crossed for the try their ambition deserved with James, having switched from wing to centre for the second half, finding space in the Ospreys defence to cross.

However, it was the Ospreys who had the final word when replacement Josh Carrington burst through the defence for his side’s fifth of the night.