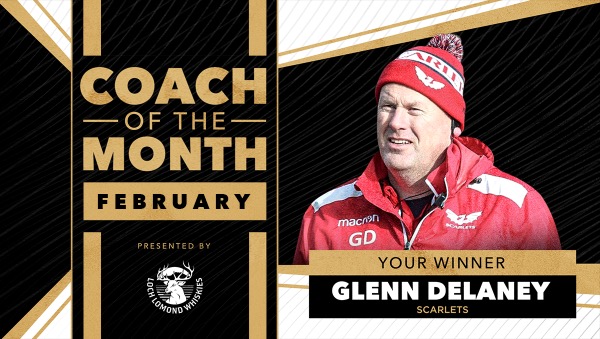 Scarlets head coach Glenn Delaney has been voted the February winner of the PRO14 Coach of the Month, presented by Loch Lomond Whiskies.

Delaney emerged from a shortlist that also included Andy Friend (Connacht Rugby), Dan McFarland (Ulster Rugby) and Johann van Graan (Munster Rugby) who were announced on the Under The Sticks podcast last week.

The voting was compiled through a combination of fan votes via the Official PRO14 App and on www.pro14.rugby while former title-winning head coach, Sean Holley, and rugby columnist Paul Williams also contributed through a weighted voting mechanism.

The coach of the month award seeks to recognise coaches whose teams embody the spirit of rugby by demonstrating qualities such as passion, innovation, inspiration and teamwork, characteristics which are shared with Loch Lomond Whiskies premium whisky range.

Delaney, who has steered his Scarlets team into the top three in Conference B in the Guinness PRO14, will receive a bespoke Loch Lomond 18-year-old Single Malt from the multi-award winning Loch Lomond range while with just two games remaining his side may yet be able to leapfrog Connacht to finish second in the table.

Glenn said: “Thanks to everyone who took the time to vote, but awards like these are recognition of the work that everyone has been putting in this season, it is about the collective not individuals.

“The victory in Edinburgh, in particular, showed the character of this group. It was a massive win for us in the context of Champions Cup qualification, but we know we still have work to do in the final two rounds, starting in Limerick on Friday night.”

In February, Scarlets overcame Benetton with a bonus-point win and took the spoils from one of the games of the campaign when overcoming Edinburgh 27-25 in the Scottish capital. Delaney’s team are now well poised to guarantee themselves a place in next season’s Heineken Champions Cup having stretched their advantage over Cardiff Blues and Edinburgh.