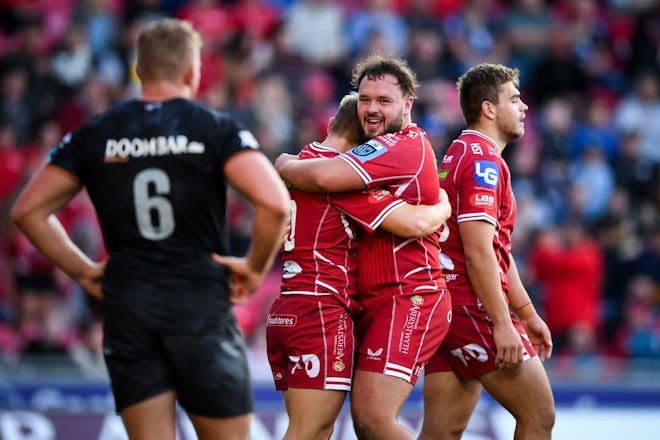 Harri O’Connor will head back to South Africa next week having benefited hugely from his “unreal” experience out there this summer.

The uncapped tighthead prop was a surprise call-up to the Welsh squad ahead of the trip to the Rainbow Nation. He was just 21 and had only made one regional start, amid nine competitive appearances for the Scarlets.

It proved to be a memorable few weeks for him as Wales claimed their first ever win over the Springboks in South Africa.

Now he is about to return there, with the Scarlets facing back-to-back BKT United Rugby Championship matches against the DHL Stormers in Cape Town and the Emirates Lions in Johannesburg.

He will do so feeling more comfortable and confident as a result of his unexpected time spent in the Welsh camp.

Reflecting on his selection, he said: “It was a big surprise. I wasn’t really looking into whether I was anywhere near it.

“It was unreal. I learned a lot out there. It was a good experience.

“The intensity is ratcheted right up when you are in camp. It’s a lot more intense, you’ve got all the detail and there is just no room for error. You’ve got to be on your game the whole time and the training was really physical.

“Everything is quicker so you are doing things when you are more exhausted and there’s bigger boys running at you, so it takes its toll on you and it’s just adapting to that really. In every area, it gets harder.

“I feel like it has leapfrogged me into this season. I am a lot more comfortable and it has just given me that confidence to show myself for the Scarlets.”

The highpoint of the trip was the second Test victory over the Springboks in Bloemfontein, with the historic triumph secured by Gareth Anscombe’s late conversion.

“The changing room was unreal afterwards. It was class to see that,” recalls O’Connor.

“To be fair, we were unlucky in the first Test. I thought the boys did really well there. It was good to get the win in the second one. It was a class feeling being in the changing room afterwards.”

With Tomas Francis ruled out by concussion and Dillon Lewis having left the Free State Stadium in a sling after the second Test, it looked as though O’Connor was going to feature in the series decider in Cape Town and probably win his first cap.

But Cardiff’s Lewis made a miraculous recovery to start the match, with young Sam Wainwright providing the tight-head cover off the bench.

“Dillon was struggling for the last Test, so I would have been ready, but he got through it, so I wasn’t needed,” he said.

Former Wales U18s and U20s star O’Connor, who turned 22 last month, still has plenty of time on his side in terms of becoming a full international and for now his focus lies elsewhere.

“Long-term, it’s given me a taste, but I’m just thinking about playing for the Scarlets and playing as well as I can for them,” he said.

“Having people like Ken Owens and Wyn Jones around me is helping my game a lot.

“I want to nail the basics of being a good scrummager first and then look to do stuff around the field as well.”

His is an interesting back story. He was born in Yorkshire and grew up in Dorset. But despite spending his formative years in England, there have never been any doubts about his allegiance, with his family roots being firmly Welsh.

“We were based in Yorkshire because my dad was in the army. During his time there, me and my younger brother were born,” he explains.

“Then we were actually brought up in Dorchester until I was 16 and I went on to Llandovery College from there.”

“I was always very aware of my Welsh roots growing up. I remember bringing friends round and they couldn’t understand my parents!

“During school holidays, we’d always be staying with my nan and bamps in Swansea. My dad would take me to Wales games and stuff.

“So it’s always been Wales for me.”

Harri’s younger brother Sam, another prop, is also on the books of the Scarlets as part of the transition group.