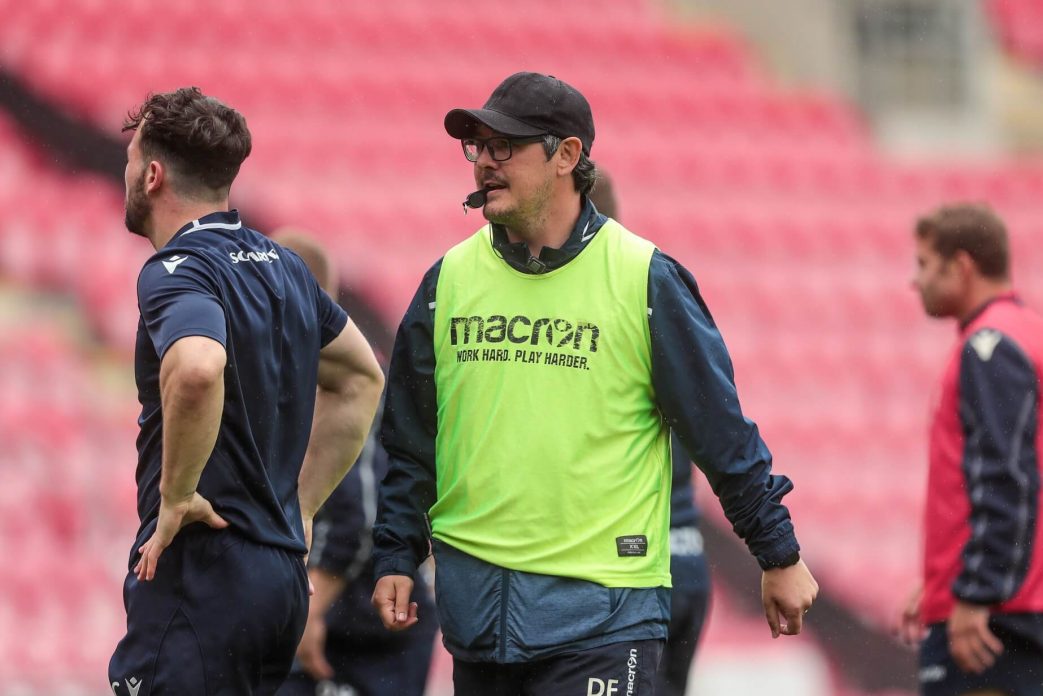 Interim head coach Dai Flanagan sat down to speak to the media ahead of Saturday’s Rainbow Cup clash with Cardiff Blues.

Dai, has it been a strange position to find yourself in this week?

DF: “It is a little bit different, a bit busier than my normal schedule! The players have been excellent, the senior players have really gathered around me. They lead the group, which is important. We got told after the game and to be fair the club spoke to me about the end of the season and the plan for the next six weeks for myself. We are all disappointed, Glenn is a top human being and has been excellent to me. When he and Brad came in, I learned loads off both of them;  they are good people and they have been excellent to me so it is disappointing on that front.”

How are you approaching the next six weeks?

DF: “It is derby week this week, a big week and we are planning to give some youngsters some rugby, players who have been in the squad and who will be important to us next year and haven’t played much. Someone like Ioan Nicholas, who is pumped about playing this weekend. He is champing at the bit and has been outstanding since returning from injury.”

What have you had to say to the players?

DF: “As I said, we’ve got a great group of senior players. They have been excellent, they have gathered round and I have leant on them to lead on the messages. They are all disappointed, Glenn is a great guy and they are going to look to put on a show this weekend to recognise that.”

Are you looking forward to Dwayne Peel coming in?

What do you expect from Cardiff Blues?

DF: Cardiff have some quality players, you look at their half-backs and then talent on the edge with Josh Adams, Matthew Morgan and Hallam Amos. They are going to front up, which they always do. They are well coached by Richard Hodges and they buy into the defence and structure. It is important we match that, which we probably didn’t do in January, they won that battle. We have to play smart but also match the physicality they are going to bring.”

How has Jon Davies reacted to his Lions disappointment?

DF: “There’s no harder worker in the club than Jon. He’s been brewing along and his performances have been getting better and better. He also helps the younger boys, the likes of Joe Roberts, Tyler Morgan. He was disappointed, you could see it in his face, but he was the first guy to congratulate his team-mates and that’s the mark of the man. The boys have also been excellent with him. There’s a lot of empathy with what he’s had to go through in the past few years with his injury and the effort he’s put in to try and get on that flight to South Africa. It’s not over for Foxy, an injury or a niggle and he can play his way back in and he knows that. There’s no better 13 in the world when he’s on form and he’s excited to go prove some people wrong.”