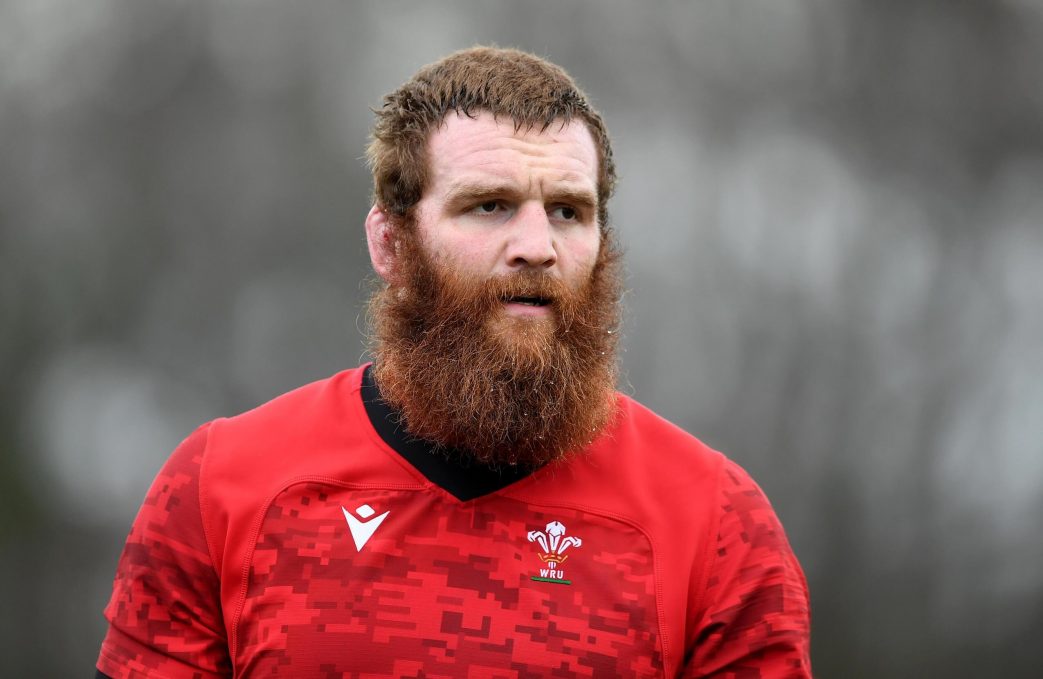 Jake Ball hopes to take out three months of frustration against England on Saturday.

That’s how long it is since the 6ft 7in Wales second row last saw his two daughters – Charlotte and Amelia – and son Jackson, due to Covid-19 restrictions and the fact his wife Christie is expecting their fourth child at any moment.

When rugby resumed earlier this summer, family man Ball, 29, had to make a big call in order to be available for matches like this weekend’s massive clash at Parc y Scarlets, which is live on S4C.

“I haven’t seen my kids for about two and half, three months now and it’s been really hard, to be totally honest,” says Ball.

“It’s a decision I had to make pretty early on in Covid, for my wife and for rugby, too.

“I knew that it would be tough trying to juggle international rugby, with all the bubble restrictions, and having my wife heavily pregnant at home, on her own with three kids.

“They’ve spent some time with extended family and so it’s been really tough.

“Luckily, we have things like Zoom, to keep in touch but it’s obviously not the same as seeing them.”

That’s not Ball’s only frustration, either, as he looks to channel all that emotional energy into trying to stop high-flying England.

He reckons his hair and trademark magnificent beard are in a right old state.

Strict rules have prevented the Wales players from visiting a barber while they have been in camp.

Ever resourceful, the Welsh Rugby Union have come up with a solution of sorts, but it’s not one Ball has trusted – as yet.

“We do have the “Covid cut” which is done by Prav (Mathema – the Wales head medic), but I’ve not quite been tempted by that yet.

“The beard and the hair are looking a bit wild and I really can’t wait to be able to get a proper haircut.

“I look a lot like Hagrid at the moment, but that’s okay.

“Things have certainly been different. But he way in which we have dealt with the restrictions has been really good. We have had no positive tests until this point and that’s been largely down to the work done by the medical team and the players.”

Wales fans will be hoping the red hair and beard are conspicuous when Ball runs out onto the familiar territory and turf of Parc y Scarlets, his home region.

This will be the English-born player’s 49th cap, and he would love nothing more than to celebrate a possible 50th against Italy the week after, with a win over the old enemy.

That’s something Ball has only achieved once in four attempts with Wales – last year’s World Cup warm-up game in Cardiff.

“England have great form coming into this game. They are playing well as a team and those two in the second row – Maro Itoje and Joe Launchbury – have been around a long time now and we know what they’re all about. They are both very good players.

“It’s going to be a big challenge for me and Alun Wyn, but he’s looking strong and he’ll be flying into our boys like he always does.”

Ball’s family sacrifices looked as if they were not going to yield reward in terms of more caps ahead of the delayed Six Nations match against Scotland, when he was overlooked by Wayne Pivac, in favour of Wasps’ Will Rowlands.

It came after an injury set-back he says dates back to the Scarlets’ game against Glasgow on October 11.

“I’ve had a frustrating time. I picked up a hamstring injury in the Scarlets game against Glasgow.

“The way that game went, I ended up playing the full 80 minutes, when I probably could have done with coming off. But we had a red card so it was difficult.

“That put me out of training for a week and a half, so I knew I was going to miss the French game.

“I was then gutted not to be involved in the Scotland game.

“But I’ve been there before. I knew what I had to do, which was to keep my head down and keep working hard as I always try to do.

“This game is going to feel very strange without a crowd. We are used to driving through Cardiff city centre on the bus and seeing all the fans on the streets.

“That creates a buzz, but this time we will just have to create our own buzz and that goes on the field as well. It’s about creating your own atmosphere in those key moments.

“I’m not surprised England have gone for six forwards on the bench. They have a wealth of experience and a lot of players to pick from.

“It must be tough picking only one side for them at the moment, but it’s a strong side and it’s going to be a hell of a game.”

Live coverage of the 2020 Autumn Nations Cup match between Wales and England. Kick off 4.00pm.