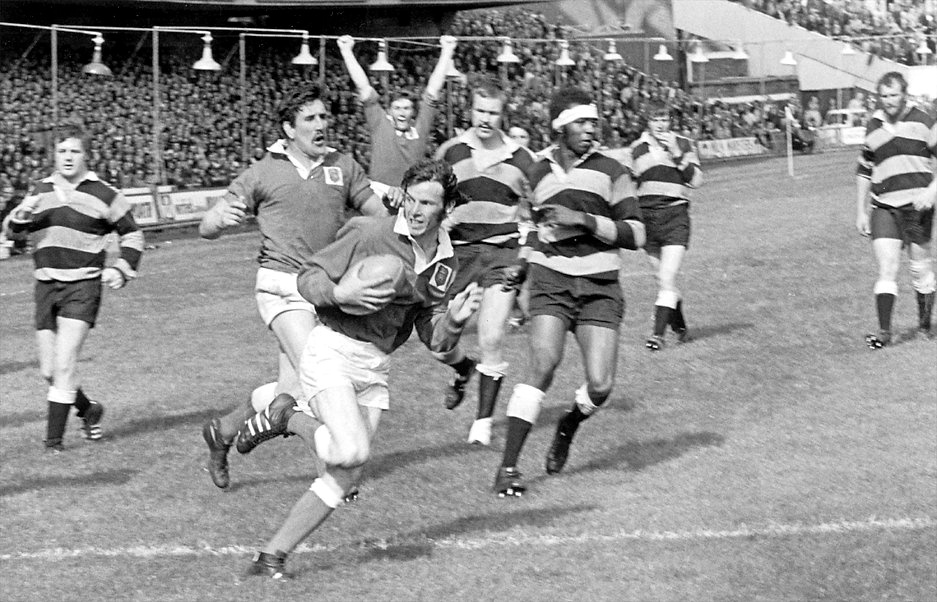 We are deeply saddened to hear that our former player JJ Williams has passed away at the age of 72.

JJ played 223 games for Llanelli RFC over nine seasons at Stradey Park, scoring an incredible 165 tries and was a member of the side that toppled the All Blacks on that memorable day in 1972.

An outstanding player in Wales’ golden generation of the seventies, he scored 12 tries in 30 Tests during an era where Wales won four Five Nations titles, including two Grand Slams. He also scored five tries in seven Tests for the British & Irish Lions across two tours.

Born in Nantyffyllon, he played outside half for the Welsh Schools team before graduating into senior rugby with Bridgend. He then moved to Llanelli and in his first season at Stradey Park helped his new club to beat New Zealand 9-3, a day that has been etched into the town’s folklore. Saturday marks the 48th anniversary of that match.

In what was then the Five Nations, JJ played throughout two Grand Slam and four successive Triple Crown campaigns.

He won 30 caps for Wales between 1973-79, scoring 12 tries, and played in seven Tests for the British & Irish Lions on tours to South Africa in 1974 and New Zealand in 1977. He equalled the record of five Test tries in those matches, winning four and drawing another of them.

As part of what is widely recognised as the greatest Lions team of all-time in 1974 he scored two tries in two Tests against the Springboks. Overall on that tour he scored 12 tries in 12 matches, including a record equalling six against South West Districts in a 97-0 victory.

His overall record for the Lions was 22 tries in 26 games, which puts him equal third on the all-time list. Tony O’Reilly leads the way with 38 in 38 games and Randolph Aston scored 30 in 20 games. He also played 10 times for the Barbarians.

Speed was one of his greatest assets and that came from his background as a Welsh international athlete. While a student at Cardiff College of Education, he went to the 1970 Commonwealth Games in Edinburgh with the Welsh team.

He also represented Great Britain at the World Student Games in Turin in 1970 and was one of many outstanding sprinters in Wales at the time, regularly competing against, and beating, Olympians Ron Jones and Lynn Davies.

A former PE teacher, he became a self-made millionaire through his industrial painting business and was awarded an MBE. He was also added to the Welsh Sports Hall of Fame ‘Roll of Honour’ in 2009.

His love of athletics was passed on to his three children, Kathryn, James and Rhys. Kathryn became a Welsh international and British junior 400 hurdler, while James ran for Wales in the middle distance and captained Cardiff AAC.

Our thoughts are with JJ’s family, many friends and former team-mates at this sad time. A true great of Welsh rugby.