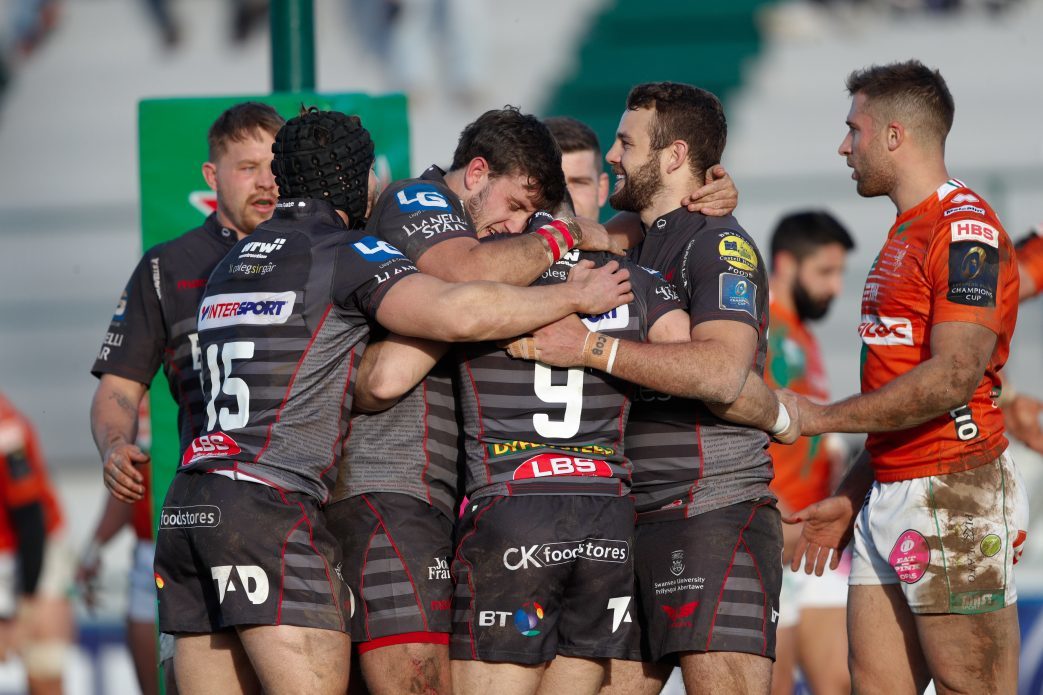 The Scarlets will take on Bath away from home and Toulon at Parc y Scarlets in rounds five and six of the competition with two wins vital to keep the dream alive.

The Scarlets faced travel disruption as a strike by Italian air traffic control led to a cancelled flight.

Speaking after the game captain Ken Owens said; “We didn’t talk about the journey out here. It was out of our control but well done to Mark Taylor for rearranging everything.

“The performance, especially defensively, by the forwards and the backs was very good. We were all disappointed at the end to have allowed them to score two tries but on the whole I thought it was a very professional performance.

“We’re very happy that we’ve not only secured the victory but the five points.

“They tend to put a lot of players in the line defensively and that allowed us enough room to get in behind them. This helped us win the territorial battle too.

“Fortunately for us we have players like Johnny Mcnicholl who is very good in that area. We saw a couple of very skilful tries out there today.

“We did our homework on them in the week but defensively we were a lot better than last weekend and that was the difference in the game.

“Since losing to Bath and Toulon in the opening two rounds we’re fully aware that we will probably need to win all remaining games if we have any hope of qualifying. It’s knock-out rugby already if you like. We’ve secured victory in these two rounds and by doing that we’ve kept the competition alive.

“We just hope now that we will be in a position to keep the battle alive as we head into the last two rounds in January.

“The game against the Ospreys will be massive. They were very good last weekend against Northampton. They will be confident and will be looking to turn their season around. The pressure will be on us as favourites and we’ll have to deal with that. It’s a home game for us and we will want to remain at the top of our conference as we head in to the New Year.”