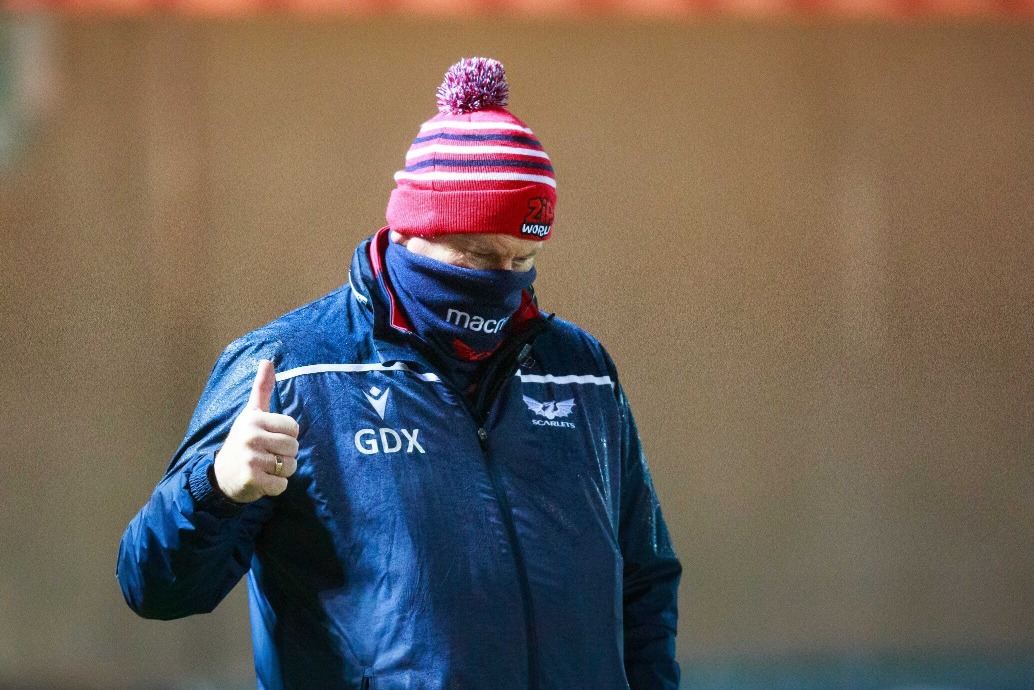 The Scarlets claimed the derby spoils after fighting back from 14-6 down midway through the second half to claim a 16-14 victory over the Ospreys at Parc y Scarlets.

After the match, head coach Glenn Delaney shared his thoughts with the media.

Glenn, what is your initial reflection on that win?

“We are delighted with the win, I’m really happy with the finish but there is plenty for us to work on. We stayed in the game and that’s what you have to do in a derby. There were a lot of things we weren’t happy about in terms of our skillsets and penalty count, we were very ill-disciplined and we need to correct that. We were putting pressure on ourselves. We were trying to play and we were quite close on a couple of occasions, a couple of pass-kicks almost went to hand. Probably not having a game for a week or so showed, our timing was a bit off; we have had a couple of disjointed weeks, we looked a bit rusty. I thought the Ospreys were excellent, put us under pressure and took their points well.”

How big an impact did the bench make?

GD: “Massive, you look at Blade and that’s why he plays Test rugby, he is a composed, calm individual who is pretty gifted and an intuitive player. He reads the play and makes the play, that was a bit of class from him. I thought Tevita Ratuva really carried and gave us impetus, he is a very physical man; Pieter Scholtz also put in a shift on his debut. The bench made a good contribution.”

How strange was it without the big derby crowd?

GD: “You go back 12 months and there were 15,000 people here and I don’t think I have experienced anything like it. This place was electric. I say it every week, we are very fortunate to be in the position we are and we are only here by virtue of the supporters of this great club. We want the fans back here as soon as possible. Hopefully they found a chance to shout at the TV screens, get involved and share the experience. The derby season is passionate, the only thing we are missing is the people, we need to get the people back into the game, they would have loved the occasion.”

GD: “It is a bit of a moving feast, guys are dropping in and out, Johnny McNicholl before kick-off, there is lots going on. It is the same for every coach, every day is a different challenge, but you approach it with optimism and try to play the game with the ball in hand and a cheer in your heart. These are strange times, but we are still trying to remain positive about our footie.”