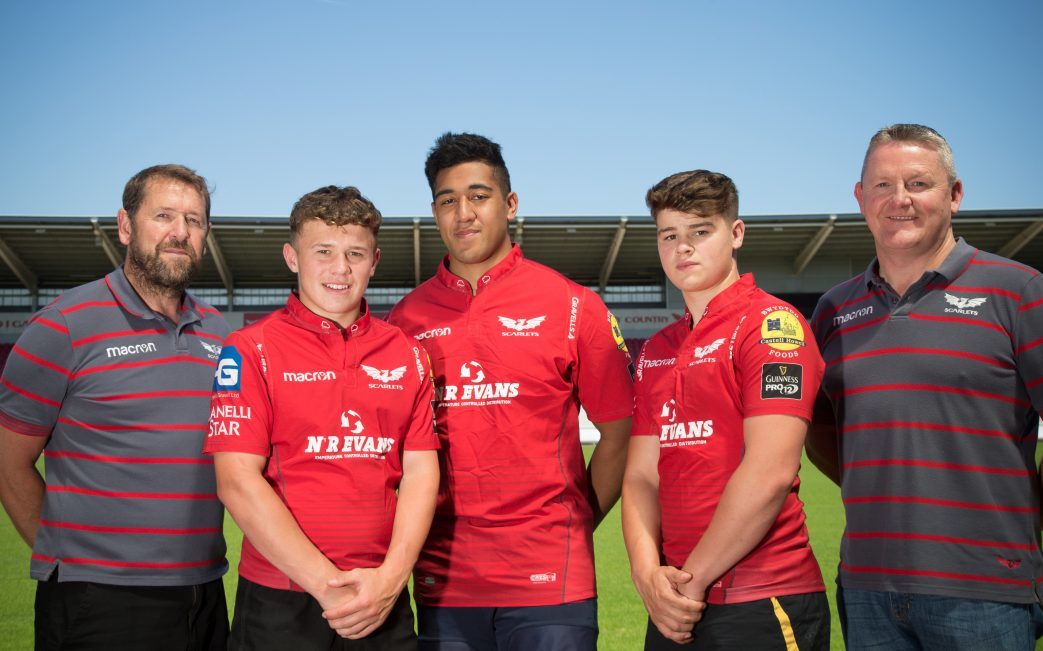 With preparations for the new season underway Scarlets Academy has welcome a new wave of talented youngsters looking to forge a successful path in to the region’s senior side in years to come.

The first intake of new recruits welcomed in to the Junior Academy are scrum half Luke Davies, wing Callum Williams and number 8 Carwyn Tuipulotu following in the footsteps of the likes of current Scarlets and internationals Gareth Davies, Steff Evans and Ryan Elias.

Luke, from Tumble, and Callum, from Cardigan both showed great promise in the region’s Under 16s East and West programmes respectively last season. Carwyn is a product of the Welsh Exiles programme and was selected for Wales Under 18s trials against Scotland earlier this year, at only 16.

The under 16s programme is an important part of region’s development pathway with players introduced to a professional training regime, the use of performance analysis and gain experience of being involved in a professional rugby environment.

The WRU Exiles programme sets out to identify, monitor and develop a network of young, Welsh-qualified boys and girls based outside Wales.

All three Academy newcomers will continue with full time education whilst also training with Scarlets Academy and receiving expert coaching and guidance from the region’s Academy and development staff.

Scarlets General Manager of Rugby Jon Daniels said; “Players like Callum, Luke and Carwyn are the lifeblood and future of the region and we’re delighted to be welcoming the three in as the first new intake in to the Academy for the forthcoming season.

“We have a very experienced team of staff running our Academy and age grade programmes doing excellent work unearthing and nurturing the region’s next generation of talent. We have seen a number of players from within the Scarlets wider community go on to become senior Scarlets as well as internationals.

“We’re also working closely with the WRU and their Exiles programme to identify Welsh qualified players who are currently residing and are educated outside of Wales.”

Scarlets Academy Manager Kevin George added; “We’re now a few weeks in to the first phase of the Academy programme for the forthcoming season. It can be difficult for young players to adjust to the training schedules and working in and around a professional environment but all three young recruits have done exceptionally well.

“Callum, Luke and Carwyn are all settling in well and have impressed with their diligence and approach to the new challenge ahead of them.”