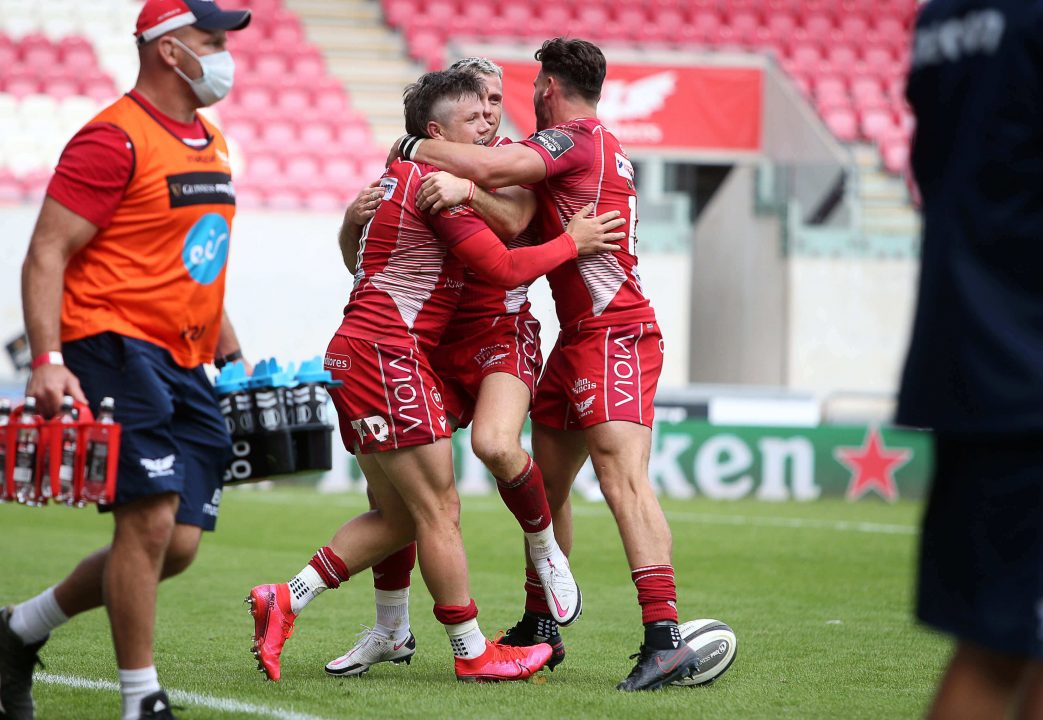 More than five months after their last game of rugby, Scarlets pressed the restart button in style with a five-try victory over Welsh rivals Cardiff Blues at Parc y Scarlets.

The closed-doors game meant the Scarlets faithful had to watch proceedings from in front of their television screens, but they would have still enjoyed the energy and invention of the Scarlets side in what was Glenn Delaney’s first game at the helm.

Man of the match Steff Evans sizzled throughout, scoring a brace of tries, while the outstanding Ed Kennedy, lock Sam Lousi and wing Johnny McNicholl – who finished off a stunning length-of-the-field effort – also crossed.

The players stood in a moment’s silence for all those who have lost their lives during Covid-19 and as also a thanks to the key workers in society. There was a poignant moment to remember Matthew J Watkins, Andrew ‘Tommo’ Thomas and Peter Rees, all close Scarlets family, who have passed away in recent months, while the players also formed a circle in a moment of unity against racism.

Both camps would have been nervous about how much rust there was to shake off after so long without rugby, but the Scarlets flew out of the blocks and were celebrating their first try after just six minutes.

Some slick handling worked Kennedy – a late replacement for Blade Thomson – clear and the Aussie showed great strength to barge over out wide.

It got better quickly on 22 minutes when the livewire Evans charged down an attempted kick through by Harri Millard, hacked on and then gathered for a fine solo score.

Leigh Halfpenny converted, but the Blues were stung into  response and worked Wales wing Josh Adams clear on the inside.

The game was being played at a high tempo with some big collisions taking place, but despite plenty more pressure the Scarlets had to be content with a Halfpenny penalty to lead 15-7 at the break.

Three minutes after the restart Evans was celebrating his second thanks to a superb chip and chase which saw him dive between two defenders to claim the touch down.

With Blues skipper Josh Turnbull in the sin bin, influential second row Sam Lousi then stretched over from close range for his first Scarlets try as the home side started to pull away.

That was just the appetiser for the try of the game on 59 minutes.

Scarlets stole a line-out deep in their own 22, the ball reached debutant Johnny Williams who surged upfield; he found Angus O’Brien on his inside with the replacement sending a looping pass to Johnny McNicholl who raced over for one of the tries of the season.

The Blues did pull a try back through replacement Matthew Morgan, but it was scant consolation as the Scarlets finished on the offensive to complete a comprehensive victory.

The win maintained their hopes of reaching the end-of-season play-offs, although Scarlets needed a Leinster victory over Munster in Dublin later that evening to keep their ambitions alive.