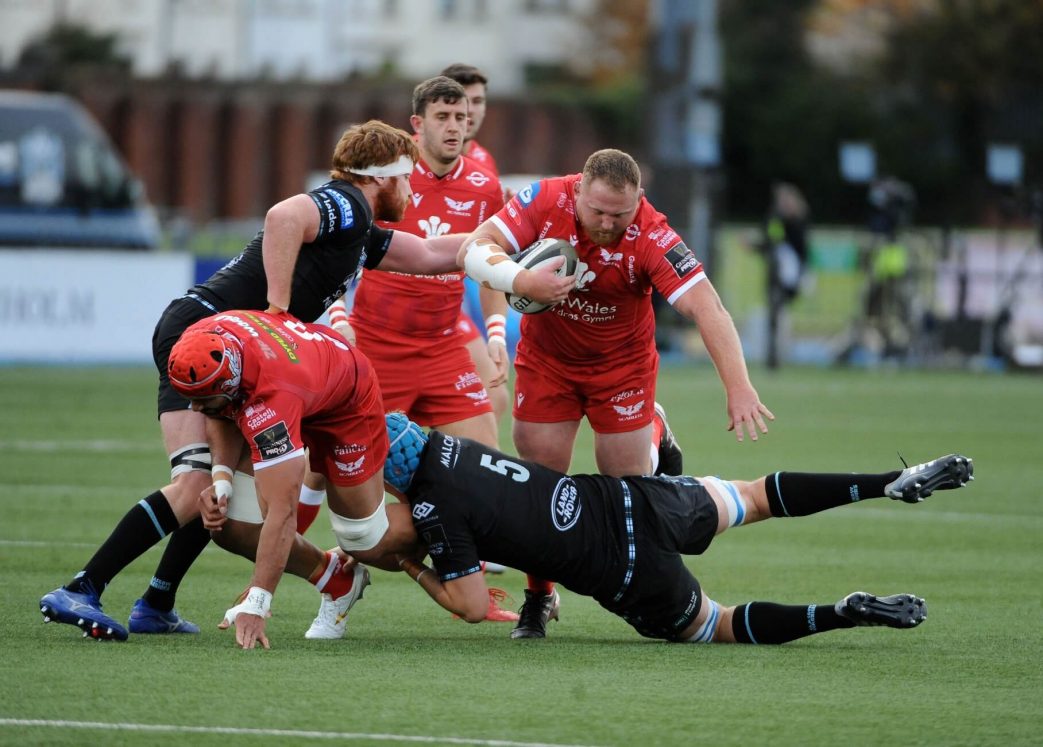 Scarlets went down to a second defeat of the Guinness PRO14 campaign after ill-discipline cost them dear in a 20-7 loss at Scotstoun.

Trailing 10-0 at half-time, they had second row Sam Lousi red carded for a dangerous tackle two minutes into the second period and despite a spirited late resurgence left Glasgow empty handed.

On his 150th appearance, prop Samson Lee crossed for his side’s lone try to spark a comeback in the final quarter, but Scarlets were unable to take the chances they created to claw their way back into the game.

It was Lee who was handed the honour of leading out the Scarlets as the visitors looked to continue their excellent record at Scotstoun.

Both sides have built a reputation for running rugby, but the opening half proved a real arm wrestle, particularly at the breakdown.

There were threatening bursts from scrum-half Gareth Davies and centre Johnny Williams, but every time the Scarlets entered Warriors territory, they conceded a penalty.

It took 28 minutes for the scoreboard operator to be called upon with Glasgow fly-half Adam Hastings landing a long-range penalty, sandwiched between two misses from similar range.

Prop Oli Kebble then barged over from close-range with Hastings’s conversion making it 10-0 to the home side.

Halfpenny was wide with his first penalty attempt as Scarlets attempted to claw back the deficit, but in the final move of the half a Williams break came to nothing as Glasgow pilfered another turnover penalty.

Needing a strong response after the restart, the second half started in disastrous fashion when Lousi was red carded for a dangerous tackle on Glasgow wing Ratu Tagive.

It wasn’t long before the Warriors took advantage of the extra man with experienced No. 8 Ryan Wilson diving over for his side’s second try.

Scotland international Hastings converted and added another penalty to push the score out to 20-0, but that sparked the Scarlets into a spirited response.

With the bench making a big impact, Scarlets brought a real energy to their performance and were rewarded when Lee found a way to the line after a lovely ‘show and go’ from a couple of metres out. Halfpenny converted and suddenly the Scarlets sensed a way back.

It needed an outstanding cover tackle from Steff Evans to deny Scotland international Tommy Seymour shortly afterwards, but back came the Scarlets forcing the home side to concede a string of penalties.

It led to lock Richie Gray being shown yellow, but the visitors couldn’t make the most of it as Ken Owens had the ball dislodged as he charged towards the whitewash.

In the dying moments, the dangerous Evans almost produced a stunning solo score but wasn’t able to ground the ball in the corner, then Tom Rogers went close on the other flank.

Reduced to 13 men following the sin-binning of Nick Grigg for an illegal high shot, Glasgow were able to hold out late on, leaving the Scarlets to reflect on a second defeat of the campaign.