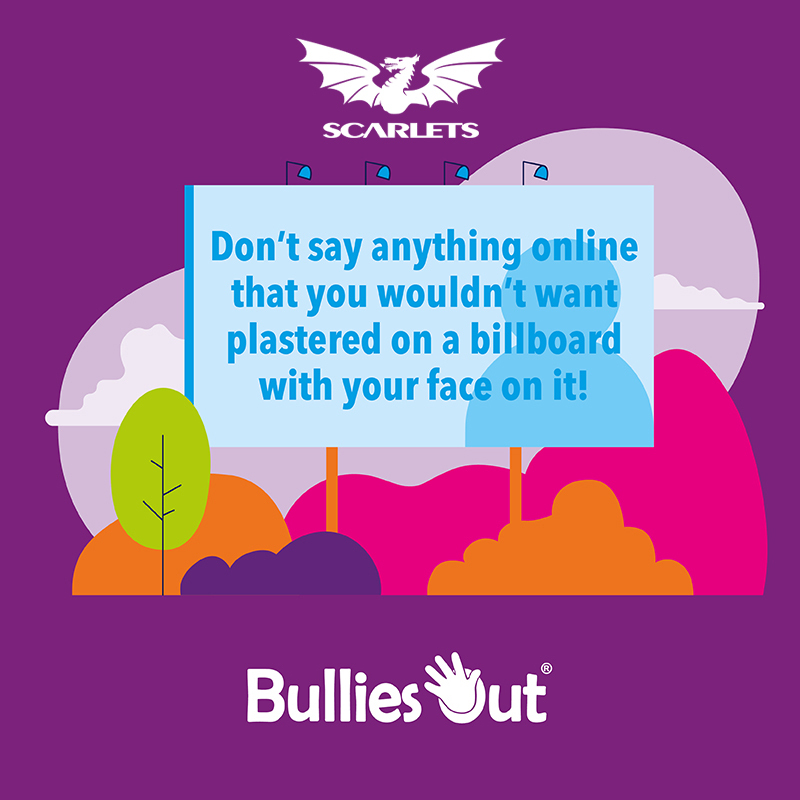 Scarlets have teamed up Welsh-based anti-bullying charity BulliesOut to address and raise awareness of social media abuse in sport.

BulliesOut is a charity that does fantastic work in combating bullying of all forms.

At the Scarlets, we have a great group of supporters who back us through thick and thin, but over the last year or so we have seen more and more abuse creeping in online and as a club and on behalf of our players we feel it is important that we support the work of charities like BulliesOut to spread the message that online abuse is not acceptable.

Our team manager Sara Davies recently wrote a powerful programme article on how abuse can impact players and their families, while Scarlets and Wales star Liam Williams has also brought the issue into the spotlight after receiving a string of abusive messages following Wales’s Six Nations defeat to France.

Writing in his BBC Online column, Liam said; “It hurts my mum, dad, sister, brother and nephew and that is not nice to see. My worry is also if it affects somebody else I am playing with. I know a lot of guys in the Wales squad who are affected by messages they receive, it hurts them personally. I have seen comments like players should come off social media if they don’t like it, but you should not have to do that because of abuse.

“I have also seen two Welsh footballers being racially abused this week. These things should not happen. I don’t have the answer on how it should stop because I am just a rugby player. But it has to stop because remember what we are receiving abuse for – playing for our country.”

Linda James, founder of BulliesOut, said: “BulliesOut are really pleased to be working with the Scarlets on raising awareness of trolling. The impact of trolling shouldn’t be underestimated – it can greatly affect the mental health of those targeted. Many trolls often target high-profile individuals with a large social media following in order to provoke reactions from their fans and followers. Not only is it an awful thing to do, something that can destroy a person’s life, a person who engages in this type of online behaviour is risking their own future as we all have a digital footprint.

“Trolling behaviour is unacceptable and more must be done to stop it from happening. Working with the Scarlets to highlight the issue is a step in the right direction and one we hope many others will take.”

Established in May 2006, BulliesOut are one of the UK’s most dedicated and ambitious anti-bullying charities. Their award winning work is delivered across the UK and each year, through work with individuals, schools, youth and community settings and the workplace, the charity provides education, training and support to thousands of people. Their ambassadors include former international rugby referee Nigel Owens.

To find out more about the charity go to bulliesout.com