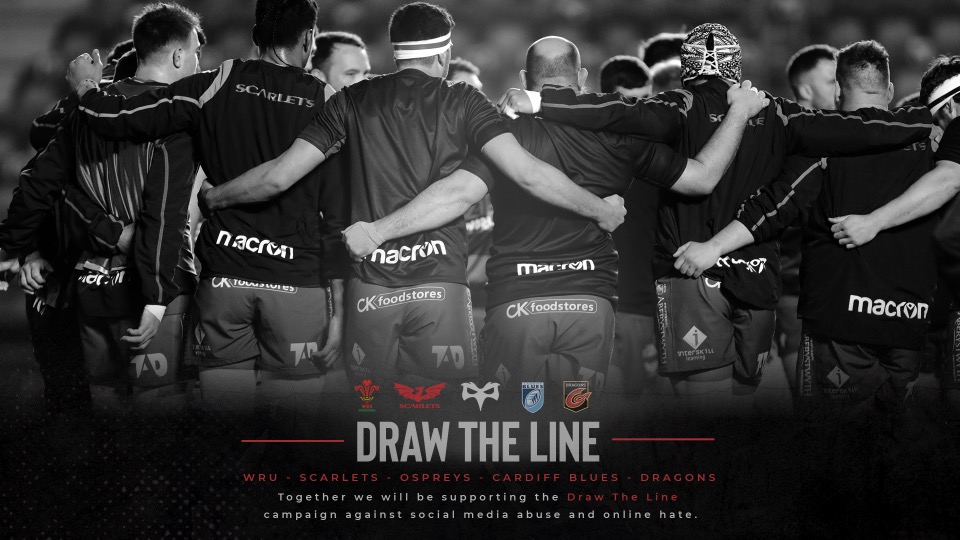 Scarlets, together with the three other professional rugby sides in Wales, will stand alongside fellow clubs and sporting bodies in taking part in a social media boycott this weekend.

Our close partners at BT have launched the first stage of a mulit-million pound campaign called ‘Draw the Line’ to combat online abuse, hate and discrimination on social media platforms.

As a show of solidarity, Scarlets, Cardiff Blues, Dragons and Ospreys will not be publishing any content on their official social media channels from 15:00 on Friday, April 30 to 23:59 on Monday, May 3.

Our website will still operate during this time and you may still receive digital communications from us.

Scarlets executive chairman Simon Muderack said: “Social media can be a wonderfully engaging and important tool in helping us stay connected with our supporters at a time when they are unable to be with us in the stadium.

“However, as a club we will not tolerate any form of abuse towards players, coaches and members of our staff. It is something we feel strongly about here. We are proud of the bond that we have between us and our supporters and we don’t want that to be spoilt by the few who consider it acceptable to post abuse on social media platforms.

“We applaud our partners at BT Sport for taking this stance and we are proud to stand alongside them, our fellow clubs and other sporting organisations and bodies in supporting this campaign.”

Everyone with an account can make small changes to make the online space safe for all. It’s time to draw the line.

BT has a successful, long-standing relationship with Welsh professional rugby and is the sole joint sponsor of the four Welsh sides.  BT has continued its support and investment into the professional game in Wales with a new three-year sponsorship deal with the Scarlets, Ospreys, Cardiff Blues and Dragons that runs until September 2023 and will see BT sponsor the four regions for nine consecutive seasons.