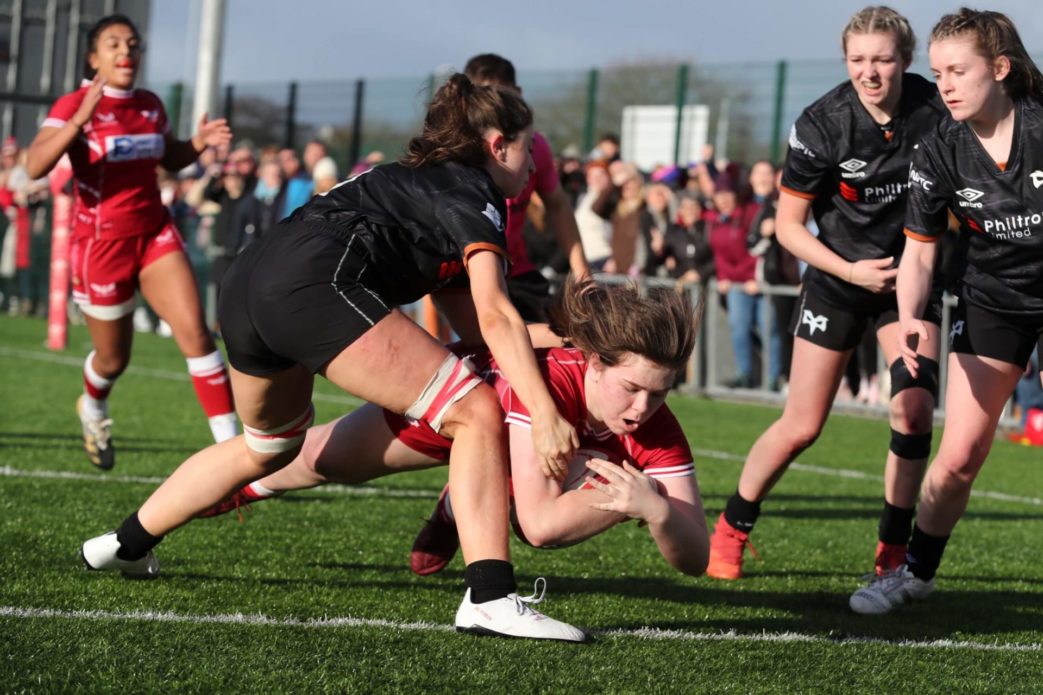 Scarlets Women’s U18s withstood a determined second-half comeback from the Ospreys to begin their regional campaign with a 22-18 victory at Ysgol Maes y Gwendraeth.

The adverse weather had meant the match had been switched from Llandovery RFC to the synthetic surface and the Scarlets were up and running quickly.

A break out wide from scrum-half and co-captain Isla Craig put the home side in a good position; quick support and a clever chip over the top found its way into the hands of centre Bronwen Griffin who recycled the ball to put wing Ela Harries in for the opening try.

Scarlets were celebrating again moments later with another robust attack allowing centre Griffin to spot the space and race over for try number two for the hosts. Fly-half Chloe Wilkins slotted the conversion to extend the Scarlets lead to 12-0.

Ospreys reduced the deficit through a penalty from Hanna Marshall, but the Scarlets continued to dominate the opening half.

No. 8 Maisie Davies dived over for try number three following a powerful carry and just before half-time, Scarlets had the bonus point in the bag thanks to a try from prop Stella Orrin to make it 22-3 at the break.

The Ospreys sparked a second half comeback early on after taking advantage of penalties stacking up against the Scarlets. Controlling the ball well Elen Evans broke loose to score the Ospreys first try of the game.

In a bid to answer back, Scarlets raced into their opponents’ half but a kick upfield was chased by the Ospreys who applied the pressure to force the error, allowing Lola Mitchell to crash over.

With less than 10 points between the two sides, Ospreys kept Scarlets locked in their half and another huge carry over the line from Evans narrowed the scores to 22-18 with less than five minutes left on the clock.

However, the Scarlets were able to hold out to come away with victory in front of their own supporters.

The Scarlets are next in action against the Dragons when the regional rounds move to North Wales on Sunday, January 29.