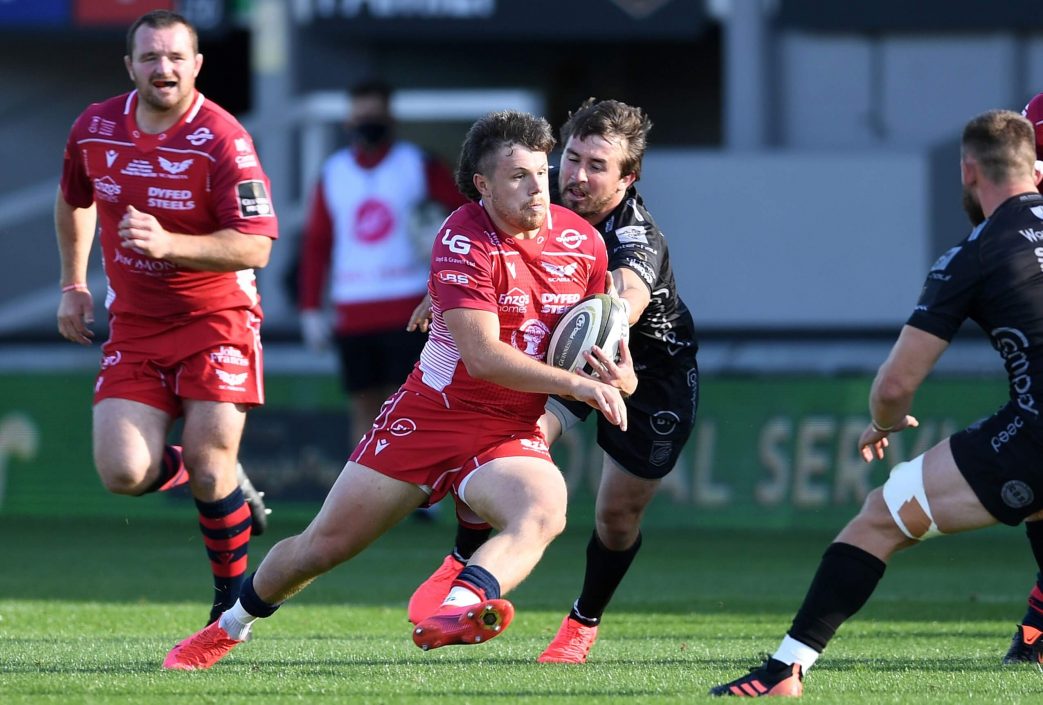 Steff Evans says both he and his Scarlets team will travel to France this weekend full of confidence for their European Challenge Cup quarter-final tie with Toulon.

The two sides will meet at the Stade Mayol on Saturday evening (kick-off 8.15pm UK tim) and Evans can’t wait for the clash after he returned to action in fine form.

Evans, 26, scored twice against Cardiff Blues and once against the Dragons as the Scarlets secured maximum points from their last two games of the regular Guinness PRO14 season.

It was not enough to earn them a play-off spot, but has allowed Glenn Delaney’s side to have a long build-up to prepare for Toulon.

“Before we started the two PRO14 games we said let’s try and get maximum points. They were two games where we could get through, but unfortunately it didn’t work,” said Evans.

“Now we’ve got another game to play towards and this is going to be our final. We’ve played Toulon a lot of times. They’re a big unit and they have history, but it’s been close between us recently. We’ve had 10 days to work towards this and we’re going to put everything out there. It’s going to be tough, but we’re working really hard on our intensity and hopefully that will pull us through.

“We need to get back to where we were as a team which is semi-finals and finals. That’s what this club is about. We have history too. This game in Toulon is a fantastic opportunity for us and if we can get a big win there then hopefully we can carry on going.”

Evans returned to rugby this month sporting a new mullet haircut which saw him grab the attention of the TV cameras and media. It also led to the creation of a Twitter account in appreciation of Evans’ style.

The man himself said: “Three games before Covid came I was talking to Tex Ratuva and Sam Lousi about different hairstyles and they said I should go for the mullet.

“I was like ‘Yeah, I think I should.’ Then lockdown hit which helped because there were no barbers open! It got longer and longer and then I got one of my friends Dylan Evans to shave the sides when we were allowed to see each other.

“The Twitter account is probably some diehard Scarlets fan who loves it! I’ve seen it. I’m not following it at the moment because I don’t want people to think it’s actually me.

Scarlets have met Toulon on numerous occasions in the last few seasons and Evans admits he and his team-mates can take confidence from those results.

On November 22 the men from Llanelli lost 17-16 at Stade Mayol despite losing Ratuva to a red card.

“We’ve improved so much since that game and we’ve got additional players now who didn’t play before due to the World Cup,” said Evans.

“Our squad is in a much better place than what it was last time.

“When we all came back in it was obvious we’d been doing our own stuff because we went straight back into the intensity we like to have in training.”

Evans credits head coach Delaney and his predecessor Brad Mooar with helping him to rebuild his confidence at regional level.

The form of the flying wing – who has six tries in 13 Tests for Wales – means he will be a marked man by Toulon.

“Brad is one of the best blokes around. I’ve never met anyone like him. He was just a breath of fresh air when he came over,” Evans said. “He had a new style of coaching I’d never been a part of before and he gave me a lot of confidence again. It was short-lived and when he said he was going back to New Zealand it was bittersweet.

“Obviously you would never want someone to turn down that opportunity. Working with Glenn last year as defence coach I got really close with him. We did a lot of work together.

“When I heard he was becoming the head coach I was chuffed. He’s a bit more old school, but he gets the best out of everyone and brings that out in training. Both of them have helped develop my game so much. I can’t say more than that about them.

“They have given me the confidence to go out on the field and express myself which I’ve done. A lot of things are working out for me at the moment and when that happens, you relish it.

“This is where I want to be – I want to keep playing at a high level. The confidence is there, but it’s the hard work I do during the week which allows me to express that.”