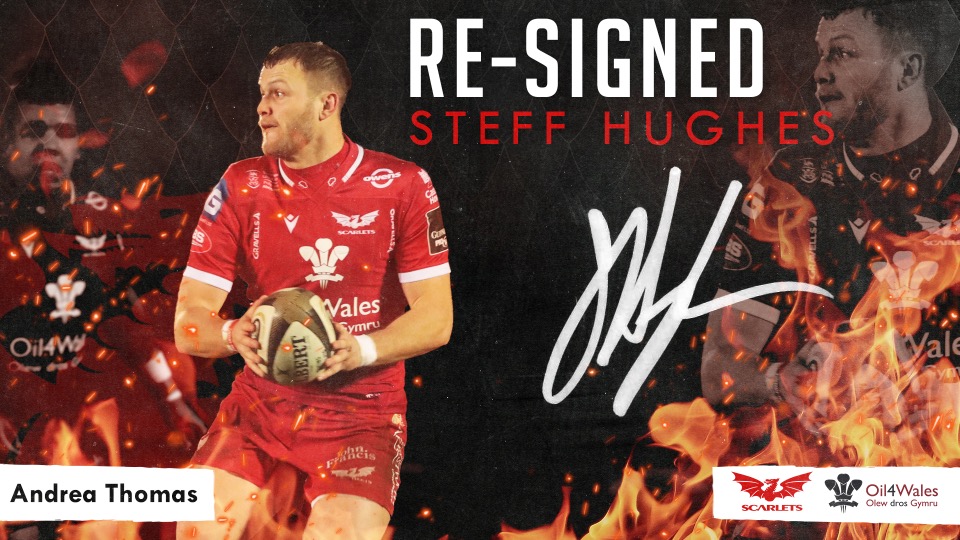 Scarlets centre Steff Hughes has signed a contract extension at his home-town club.

Hughes came through the Academy system at the Scarlets and now in his eighth season is closing on a century of appearances in a Scarlets jersey.

A former Wales U20s captain, he made his senior debut in a LV=Cup match against Saracens in 2013 and after recovering from a major knee injury has gone on to play 98 times for the Scarlets.

The 27-year-old centre has worn the captain’s armband when club captain Ken Owens has been on international duty for the last two seasons, establishing himself as a regular in the Scarlets midfield.

Hughes’s two tries in the comeback win over Connacht ensured the Scarlets will be playing Heineken Champions Cup rugby again next season.

“This is my home club, I remember going to watch games at Stradey when I was young and I’m hugely proud to pull on the Scarlets jersey. Signing a new contract was an easy decision to make,” he said.

“As a group we know we haven’t achieved what we wanted this season, but there is a massive amount of talent in the squad and having qualified for next season’s Champions Cup we are looking forward to being back challenging the best sides in Europe again.

“There are a lot of young players who have taken their opportunities this year and are pushing the senior players for places. We are aiming to finish the season well in the last two matches in the Rainbow Cup and hopefully we can welcome our supporters back to Parc y Scarlets soon. We’ve missed them this season.”

Scarlets general manager of rugby Jon Daniels said: “Steff embodies what we are about as a club. He is a leader in our group and continues to drive standards on and off the field.

“He has shown his character and resilience by coming back from a serious injury and for the last couple of years he has proven to be one of the most consistent performers week in week out in Welsh rugby. We are delighted that he has re-signed with the Scarlets.”