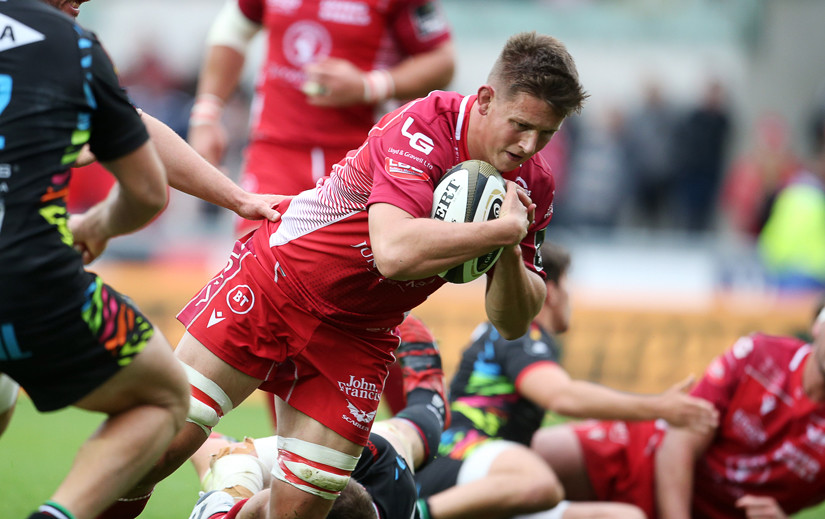 “It is great to see the boys playing with a smile on their face,” – that was the verdict of head coach Brad Mooar after watching his Scarlets side put Zebre to the sword 54-10 at Parc y Scarlets.

Scarlets ran in eight tries in all, four in each half, to maintain their unbeaten start to the season and hoist them to the top of Conference B of the Guinness PRO14 standings after three rounds.

“They are a group who are willing to express themselves, they are also keeping their feet on the ground and looking to improve all the time, which is great. I am thrilled for them,” said Mooar.

“We are three wins from three, it has been a good start.”

The Scarlets scorched into an early lead through tries from man of the match Kieran Hardy and flanker Josh Macleod; wing Ryan Conbeer and Hardy again then ensured the try bonus point was secured before half-time.

Further tries were scored by hooker Taylor Davies, a brace by Johnny McNicholl and replacement lock Josh Helps – his first for the Scarlets – after the break.

Mooar added: “We won’t get ahead of ourselves, we will enjoy the moment we are in right now and won’t look too far ahead.

“We have an individual training week next week where the boys will break out of schedule and still do the work they need to do but in their own time and then come back in a week Monday bouncing and energised for the next push which starts with Edinburgh away.”

“This group have been really clear about our identity, what we want to achieve and what we want to look like in a Scarlets jersey. I think they are filling the jersey superbly and creating some lovely selection headaches for the coaching room.

“There is also a group of guys outside the 23 who have put a massive effort in during the week to get the playing group ready to perform. Those guys are pushing and causing selection headaches. It is a great place to be.

“It has been a good start; we are humble with it and just looking to keep working hard and keep improving.”