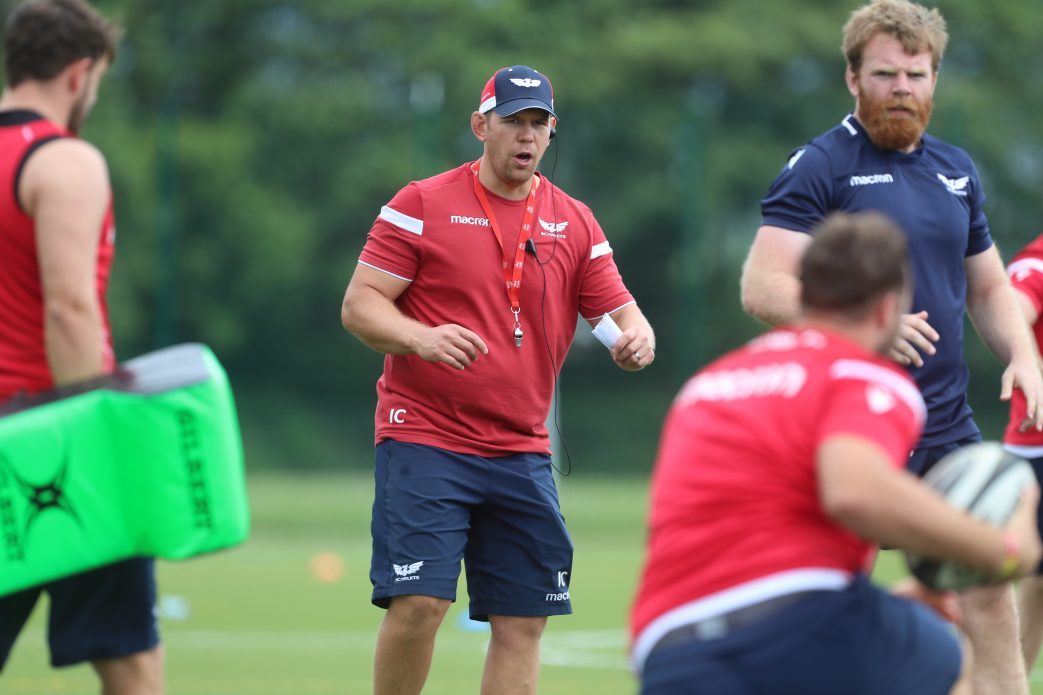 As the Scarlets continue their preparations for the forthcoming campaign, we caught up with forwards coach Ioan Cunningham on the progress being made in the opening weeks.

Cunningham, along with backs coach Dai Flanagan, assistant attack coach Richard Whiffin and head of strength and conditioning Huw Davies, have been putting the players through their paces during training at Coleg Sir Gar and on the training field at Parc y Scarlets.

The squad is currently without their international contingent ahead of this autumn’s Rugby World Cup.

Fourteen players are with Wales in camp in Switzerland; Blade Thomson has been in Portugal with Scotland, while Kieron Fonotia (Samoa) and Sam Lousi (Tonga) are set to feature in the Pacific Nations Cup, which kicks off later this month.

The first group of players, including members of the Scarlets Academy, started training last month and they were joined by the likes of Johnny McNicholl, Josh Macleod, Werner Kruger, Steff Hughes, Steve Cummins and new signing Tom James this week.

Cunningham said: “It’s been good. We have had 38 boys out training this week. The first group were in for two weeks and have laid a strong foundation and they have now been joined by the wider group. .

“There are also guys like Lewis Rawlins, Tom Prydie and Daf Hughes, who are coming back from surgery and they are not far away as well. They are on the side of the field running and getting closer to the team sessions day by day.”

New head coach Brad Mooar and defence coach Glenn Delaney are set to arrive in Llanelli this month as the Scarlets set their sights on the opening weekend of the Guinness PRO14 which kicks off at the end of September this year because of the World Cup.

Asked if there has been any change in pre-season preparations, Cunningham added: “If I am honest, we have probably introduced rugby really early this year.

“Brad has been very clear he wants rugby in from the start and Richard Whiffin, Dai Flanagan and myself have chucked it in from the go and I think the boys have responded very well to it and are enjoying the programme.

“It is not long now before Brad joins us and Glenn (defence coach) will be here next week. We are looking forward to the whole team coming together which is not too far away.”

Cunningham has also been delighted with the impact made by new signings Tom James, Danny Drake, Dane Blacker and Alex Jeffries.

“They have all added to us, which is really important and what we wanted,” he added.

“Brad is massive on ‘winning the moment’, that is the theme we are driving with everyone.”