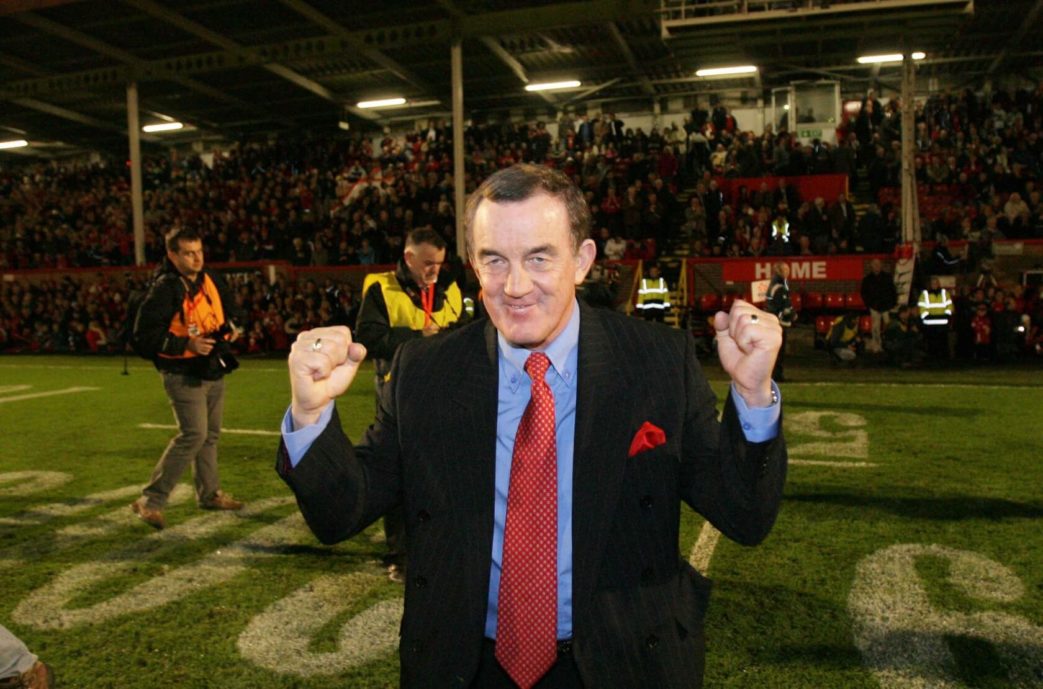 Tributes have been paid from across the rugby world following the passing of Scarlets great Phil Bennett at the age of 73.

Loved throughout the game, Benny has left an indelible mark on the rugby family and we have been overwhelmed by the heartfelt messages that the club has received.

Following the announcement on Sunday evening, tributes and condolences were sent on social media from the Welsh Rugby Union, Irish Rugby as well as our colleagues from the across URC – the Ospreys, Cardiff, Dragons, Leinster, Glasgow Warriors among them.

London Welsh, Pontypool, Pontypridd, Yr Hendy, Llangennech, Amman United, Ystradgynlais, Carmarthen Quins, Furnace and Benny’s own home club Felinfoel RFC were among many of the grassroots clubs who have paid tribute to the great man, who played 413 games for Llanelli RFC, won two Grand Slams with Wales and toured with the British & Irish Lions in 1974 and ‘77.

The Lions official Twitter page posted this message: “We are saddened to learn of the death of Phil Bennett. Phil toured with the Lions in 1977 and was a key member of the revered Invincibles of ’74. Our sympathies are with his family and friends at this time. He will be greatly missed. RIP Lion #506”

In a poignant tribute in the Daily Telegraph, former Lions team-mate Ian McGeechan wrote: “Phil Bennett was a team-mate, a fellow Lions tourist, and a friend. Benny was not just a wonderful rugby player but an exceptional human being. I played alongside him for eight Lions tests in 1974 and 1977, and got a real sense of him as both a player and a man. Even at the time I thought that each outing was a rare privilege, and the passage of time has not dulled my appreciation of his genius.”

Former Llanelli, Wales and cross-code legend Jonathan Davies said: “I’m so upset to hear the passing of the great Phil Bennett. He was my inspiration as a kid. He even invited me to go sprint training with him when I was in school.  He also called Neath RFC to tell them to give me the opportunity of first class rugby. He became a great friend and I will miss him greatly.  My thoughts and prayers are with Pat his wife and rock and family and friends”

Another Scarlets great Scott Quinnell added: “Just heartbroken to hear the news. Phil was a legend of LlanelliRFC, WelshRugbyUnion and lionsofficial but more than that just the best man. Thoughts, love and prayers to Pat and the family.”

Former Llanelli captain Rupert Moon, the man who led the side to the famous win over the Wallabies in 1982, said: “True legend…. so much to be grateful for…. on & off the field. Diolch yn fawr. My thoughts are with his family. Sincere condolences.”

Former world number one referee Nigel Owens wrote on Twitter: “Very sad news. My deepest sympathy to his wife Pat, the boys, and all the family. Not only a legend on the field but the very best of them off it as well. A true genuine gentleman. RIP

First Minister Mark Drakeford said: “Incredibly sad to hear this news. My thoughts are with Phil’s family and friends tonight. Genuinely one of the greatest to ever play the game – he will be missed by us all.”

Welsh Hollywood actor Michael Sheen wrote: “A part of Wales has been lost. Like some huge, beautiful coastal headland being claimed by the sea. Or perhaps slowly side-stepping into it. What a gift he had. And was. Seeing these tries now brings me to tears. Much love to the family. And thank you, sir. #PhilBennettRIP”

It was Phil’s mesmeric sidesteps that set up arguably the greatest ever try for the Barbarians in Cardiff in 1973.

A post on the official Barbarians account read: “Very sad to hear Phil Bennett has passed away.  A true #rugby legend & an iconic figure in our history as shown below.  Thoughts with Phil’s family and friends. RIP Phil” A clip of that Gareth Edwards score accompanied the post.

English rugby icon Sir Bill Beaumont tweeted: ‘Desperately sad to hear of Phil Bennett’s passing. One of the greats of Welsh & Lions rugby. Many a wonderful memory of touring with him in 77. Lovely person. Condolences to his family and friends at this sad time’.

Respected journalist Peter Jackson wrote: “Every chapel bell in Wales ought to be ringing out tonight in honour not just of one of the greatest rugby players who ever walked God’s earth but the most humble of men. I was blessed to have known him for almost 50 years.”

The Welsh Rugby Players Association wrote: “ Our deepest condolences go out to all of Phil’s family and friends. He truly was a legend of the game who inspired generations.”

Former Scotland scrum-half Andy Nicol said: “So sad. Benny was some player and some man. So generous with his time and a brilliant storyteller. Thoughts with his family. #RIPBenny”

The official Guinness 6 Nations Twitter account posted this message: “An icon of the game and of our Championship. Rest in peace, Phil”