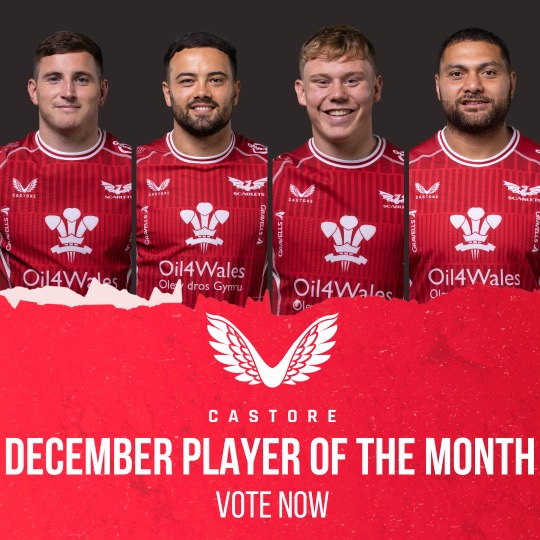 It’s time to vote for your Castore Scarlets Player of the Month for December for a chance to win a £100 Castore gift voucher.

The award includes the BKT United Rugby Championship matches against the DHL Stormers, Emirates Lions and Ospreys as well as the EPCR Challenge Cup wins over Aviron Bayonnais and Toyota Cheetahs.

Here are your four nominees.

Winner of the October award, Sione has continued to deliver big performances, both in the second row and at No. 8. Player of the match against the Cheetahs, he also put in a big shift in defeat to the Ospreys in Swansea.

Continues to enhance his reputation in the No. 10 jersey, Costy ran the show in a player-of-match display against Bayonne and shone a week later in Parma against the Cheetahs.

After being part of the Wales squad in the autumn, Blacker returned to domestic duty and hit the ground running with his sharp play around the base. Scored a try in the win over Bayonne.

After missing the trip to South Africa, Macleod has been a totemic presence in the Scarlets back-row. Was outstanding in defeat to the Ospreys on Boxing Day, following up strong displays in Europe.

To enter you need to cast your vote HERE with the winner randomly picked when the poll closes on January 5.