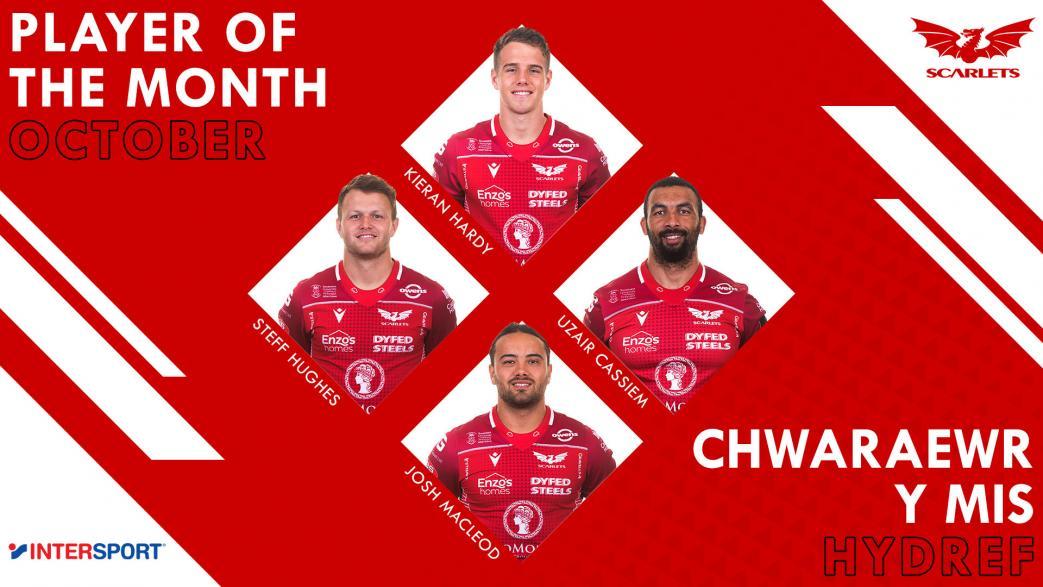 We are today launching our Scarlets player of the month award, sponsored by Intersport, and you, the fans, have the chance to pick the winner.

Each month, in consultation with the Scarlets coaching team, we will be putting forward a four-man shortlist of players who have stood out in our matches in the Guinness PRO14 and European Challenge Cup.

Those up for the opening award after the first four rounds of the PRO14 against Connacht, Glasgow, Zebre and Edinburgh are flanker Josh Macleod, No. 8 Uzair Cassiem, centre Steff Hughes and scrum-half Kieran Hardy.

Here’s a few details on their performances so far this season.

Josh was an inspiration in the rain-soaked win over Connacht in round one, putting in a huge shift in defence and claiming crucial turnovers for a deserved man-of-the-match award. He crossed for one of the Scarlets’ eight tries in the victory over Zebre.

Man of the match in the win over Glasgow at Scotstoun, the South African No. 8 has carried more than any player in the PRO14 in the opening four rounds. Uzair is also the Scarlets’ leading line-out forward and tops the tackle charts.

The centre has thrived on the responsibility of captaincy and has produced some stunning assists along the way. His dummy kick and pass sent Paul Asquith over for a crucial score against Connacht and a couple of pin-point chips paved the way for tries for Ryan Conbeer and Johnny McNicholl against Zebre.  Steff is also third in the Scarlets’ list for carries this season.

The livewire scrum-half has picked up where he left off last season, crossing for three tries in four matches. Kieran set the Scarlets on their way to victory in Glasgow with a crucial second-half score and then added another two in a man-of-the-match display in the rout of Zebre.

Click on the link above and then the player’s picture to make your choice for the Intersport Scarlets Player of the Month before voting closes on Saturday, November 2 at 12pm.