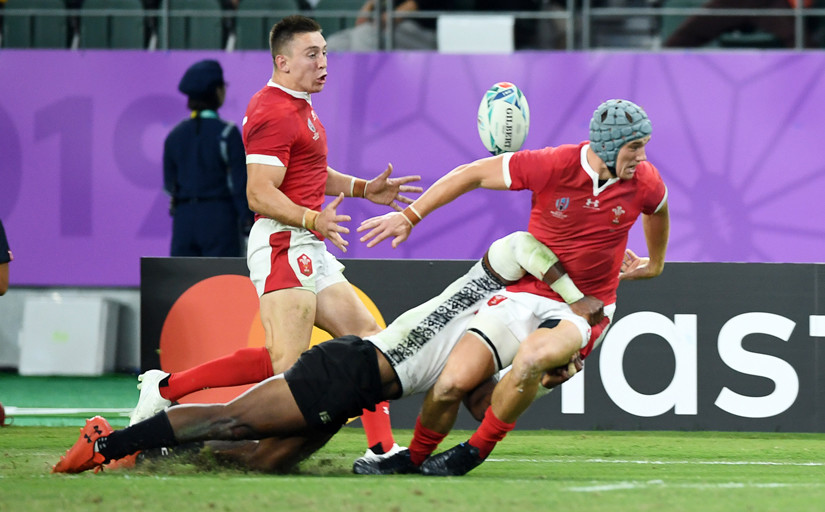 Wales survived a scare to claim a hard-earned 29-17 victory over Fiji to secure a place in the quarter-finals of the Rugby World Cup.

The Grand Slam champions were shell-shocked by a blistering Fijian opening in which the islanders struck for two tries inside the opening 10 minutes.

But aided by a hat-trick of tries from Hendy’s Josh Adams and a late effort from Liam Williams, Wales claimed a bonus-point triumph to remain top of Pool D.

It was a disastrous opening for Wales, who were stunned by a rampant Fiji side in the opening exchanges.

Powerhouse wing Joshua Tuisova bulldozed his way over for the first after just four minutes, then after Scarlets skipper Ken Owens was shown yellow for what was deemed a dangerous challenge, full-back Kini Murimurivalu showed good strength to stretch over in the corner.

Needing some form of inspiration, Wales found their way back into the match after Fijian lock Tevita Cavubati joined Owens in the sin-bin for an illegal clear out.

And it led to Wales crossing for their opening try.

Fly-half Dan Biggar launched a pin-point cross-kick in the direction of Adams and the former Llanelli wing showed great skills to snatch the ball out of the sky for his first try.

Biggar converted to reduce the arrears to three points and more pressure led to Wales’ second.

After earlier being denied a try by his boot brushing the whitewash, Adams was put over for his second on the half hour mark to give Wales the lead for the first time.

Biggar converted again, but the alarm bells continued to ring before half-time as Fiji’s threatening back division caused more problems for the Welsh defence.

That continued after the break and when Scarlets flanker James Davies became the latest to be shown yellow, Fiji’s adventure was rewarded with a third try from a driving line-out.

Replacement Rhys Patchell levelled matters at 17-17 going into the final quarter and it was Wales who finished the stronger.

Jon Davies produced his trademark fend to send Adams over for his hat-trick, then Gareth Davies turned provider for his former Scarlets team-mate Williams.