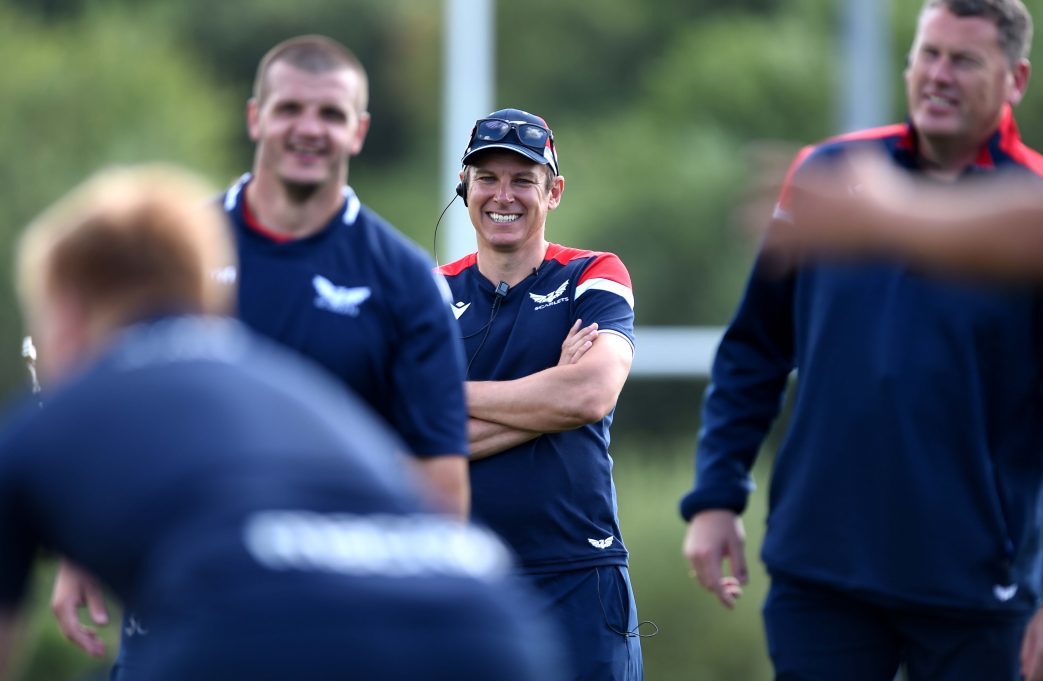 The Scarlets play their first warm-up game of the campaign against Jersey Reds at Stade Santander International on Saturday (3pm kick-off), with head coach Brad Mooar handing opportunities to 31 members of his squad.

Two separate sides have been selected for each half with experienced Springbok prop Werner Kruger and centre Steff Hughes given the captaincy roles.

Kruger will lead the first-half team that includes summer signing Tom James, while Hughes will take the reins after the break, skippering a side that will see Danny Drake and Dane Blacker make their Scarlets debuts.

“It is really exciting,” said Mooar. “We have had nine weeks of pre-season with the boys going at each other; it is time to have a go against another side.

“We are going with two teams and there are also boys playing in the Celtic Cup with the A team on Saturday. They have all worked hard in pre-season and all deserve the opportunity to put in a performance with the jersey on.

“We are also still looking at everybody and working out who we are going to play in the first Guinness PRO14 game against Connacht. It is a clean slate at the moment for all the boys in the group.

“Jersey are a good side, they did well in the Championship last season and knocked off Russia a few weeks ago. They will be keen to get into us, which is what we want.”

Asked what he is hoping to get out of the game, Mooar added: “There are certain areas we are looking at, but  I just want to see a side that is clear in what they want to do and you can see that in their execution.

“It won’t all be tidy, but there will be moments when you think, ‘yes, that’s working’ or maybe ‘okay we need to tinker with that’. I am looking for energy and intent, clarity of mind and execution.”

The Scarlets will be without 14 players on World Cup duty, plus Wales internationals Rob Evans, Samson Lee and Steff Evans, who are set to link up with the squad on Monday ahead of next week’s clash with the Dragons in Newport.

Mooar said: “We have got 11 in the Welsh squad (for Japan) and we are extremely proud of those guys. We had a great team function this week where we acknowledged that. We are fully behind them and also Blade Thomson, Kieron Fonotia and Sam Lousi, who have been named in the Scotland, Samoa and Tonga squads.

“The flip side of that is Rob, Samson and Steff have missed out at this point – you never know what can happen, they could well be back in the mix before or during the World Cup.

“They have been outstanding, they have connected, they have shown their excitement and willingness to get back into the mix with the Scarlets group.

“What we said to them was ‘do whatever you want this week’. If they wanted to come in, they could and if they didn’t, they could do their training outside. Then, Monday after Jersey we are in and we are on.”