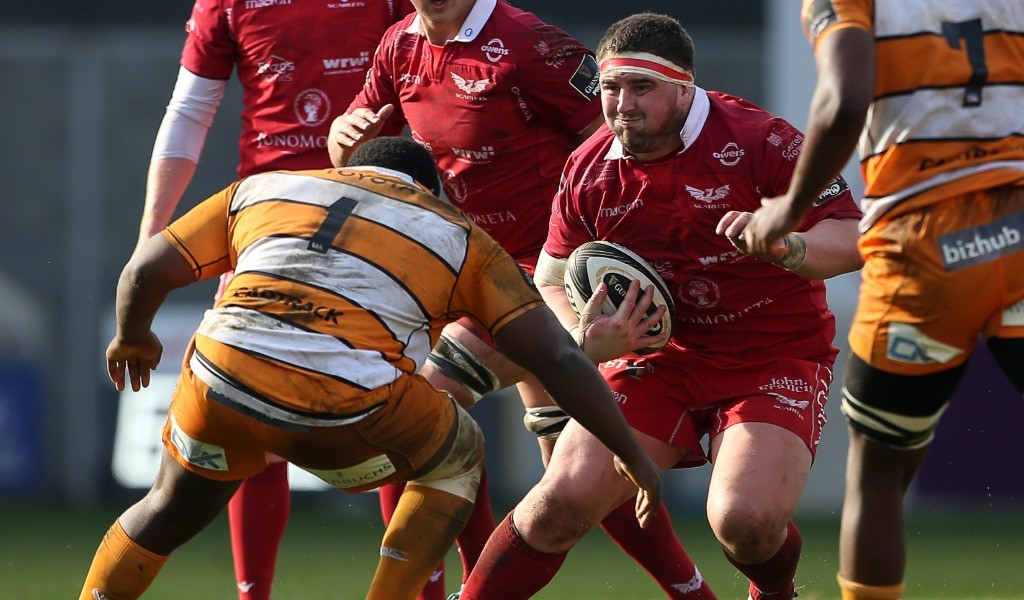 Wyn Jones says it is vital the Scarlets back up their crucial win out in Bayonne when the two sides meet again in round four of the European Challenge Cup at Parc y Scarlets on Saturday (7.45pm).

The December double-headers have always been pivotal in the quest to qualify from the pool stages and if the Scarlets can claim a third win of the Pool 2 campaign this weekend, they will be firmly in the hunt for a knockout spot.

One of 11 Scarlets in Wales’ World Cup squad in Japan, Wyn missed the trip to the Basque country because of a slight hamstring issue, but is ready to make his first appearance of the season this weekend and is relishing his return to Scarlets colours.

“It is nice to be back,” said the popular front-rower, speaking to the media this week.

“As a squad, the boys have done really well when we’ve been away. It’s been a good start, we are in a good place and that makes it easier for the boys coming back.

“We haven’t lost many games and the away win in France (19-11) last weekend was great.

“Hopefully we can replicate that at home. It is exciting to get them on a faster track at Parc y Scarlets and we don’t want to undo the good work of last weekend.

“We know in Europe you have got to win your home games and if you manage one or two away from home you are in a good place to qualify. It is something we have focused on this week.”

Wyn featured in all of Wales’s World Cup matches in the Far East, establishing himself as his country’s first choice loose-head.

But the Llandovery product readily acknowledges he can take nothing for granted – both for Scarlets and Wales – with team-mate Rob Evans in such impressive form.

“It is good to have that competition, it brings the best out of everyone and we will push each other every day.”

While Scarlets supporters have been well aware of Wyn’s calibre for some time, it is only recently that the 27-year-old has had his name up in lights.

In a feature in this month’s issue of Rugby World magazine, Wyn talks fondly of his time with his home club Llandovery and how he earned his spurs playing Welsh Premiership rugby with the Drovers before graduating to the regional set-up.

“Maybe I came through an unconventional route not being part of the Academy, but I enjoyed everywhere I have played over the years,” he added.

“I don’t know if my way was harder; I was watching the Academy boys train the other day and it was pretty tough, they are working hard.

“But as I said, I have enjoyed everywhere I have played and it is something I will keep on doing.”

Click here to purchase your tickets for Saturday’s clash with Bayonne.