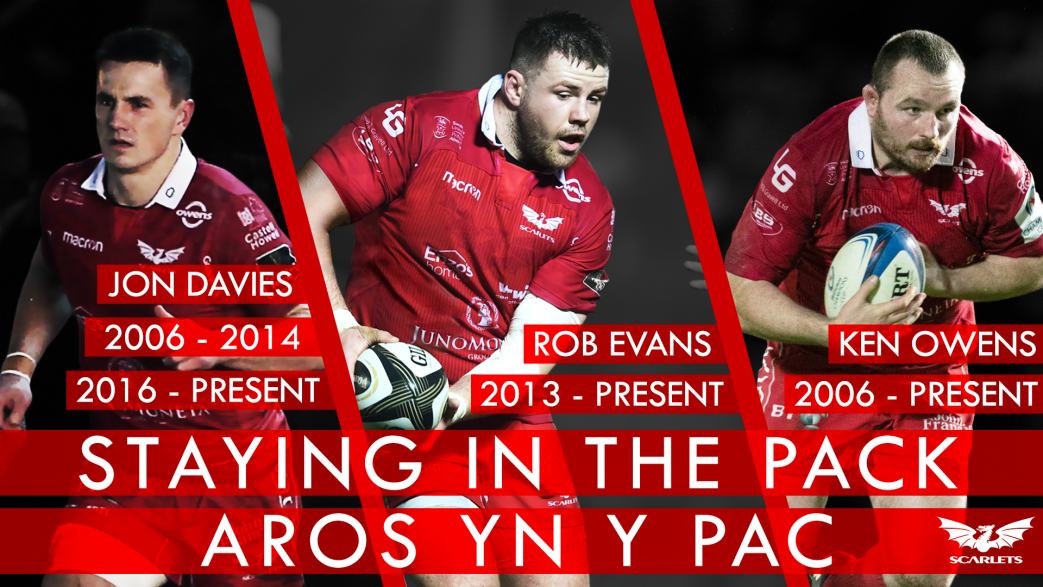 The Scarlets are delighted to announce that three of Wales’ Grand Slam heroes have signed new contracts.

Jonathan Davies, Ken Owens and Rob Evans have agreed new deals to extend their stay with their home region.

The international trio have come through the academy system at the Scarlets and were key members of the side that lifted the Guinness PRO12 trophy in 2017.

Scarlets head coach Wayne Pivac said: “I am delighted that Rob, Ken and Jon have re-signed for the Scarlets.

“They have been a big part of our success in recent years and I know that our incoming coach Brad (Mooar) was very keen to secure their services moving forward.

“It is great news for the Scarlets.”

Davies has played 154 matches for the Scarlets since making his debut in August 2006.

He has gone on to become one of the leading centres in world rugby and was named the British and Irish Lions player of the series in 2017.

“I could not be happier to be staying with the Scarlets,” he said.

“It is something I want to be part of.

“You want to be playing in the big competitions and competing for trophies and we have been doing that at the Scarlets.

“I am delighted to have signed a new contract.”

Owens was a Lions Test player in 2017 and won his 64th Wales cap against Ireland last weekend.

The talismanic hooker has made 238 appearances for the Scarlets since making his debut against Northampton Saints in 2016.

Owens has captained the Scarlets since 2014.

He said: “I am delighted to have signed an extension to my contract.

“I am looking forward to a big end of season and building on the success we have achieved in recent years.”

Evans is another who has been at the heart of the Scarlets’ success.

The Pembrokshire product has made 118 appearances since making his debut in January 2013 and was named in the Guinness PRO14’s dream team last season.

“I love playing here, you are playing with your mates and there’s a great spirit in the squad,” said Evans.

“I have been proud to be part of the success we have achieved over the last few years.

“I want to keep playing for Wales and there is no other side in Wales I would want to play for.

“This is an exciting time to be involved with the Scarlets. I am looking forward to pulling on a Scarlets jersey again and helping us get into the play-offs for another season.”

Scarlets general manager of rugby Jon Daniels added:  “We are delighted to have key players like Jon, Ken and Rob sign new deals.

“All three are from West Wales, are proud of their roots and have played a huge part in our success in recent seasons.

“As Scarlets we are equally proud to see them achieve what they have on the international stage and for all three to sign new contracts is an indication of our ambition over the coming years.”