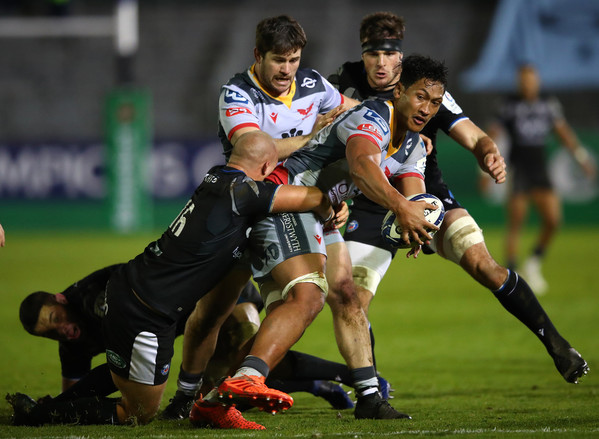 Glenn Delaney lauded the incredible never-say-die defensive effort that saw the Scarlets hang on for an outstanding 23-19 Heineken Champions Cup win over Bath at The Rec.

The Scarlets produced a heroic rearguard in the final minutes, summed up by Morgan Jones’s match-saving tackle on Ben Spencer with the tryline beckoning.

“That match had something for everyone didn’t it?” said a relieved Delaney afterwards.

“We had a chance to score just before those final minutes and then the commitment and effort at the end was massive, we were under so so much pressure, that was about character. For me, it was epitomised by Gareth Daves, the boys wanted to play for him on his 200th and it was really special the way they finished it off to get the job done for him.

“Those final minutes were all about commitment and heart. There were bits about the defence in the first half I wasn’t so happy with, I was frustrated we weren’t  as aggressive as we would have liked, but that character comes through in the big moments. These are big game players. We are learning as a group what it is like to be in this contest and that was a big European game for us.

“It is a big step forward, we will enjoy it and get ready for Toulon next week.”

Scarlets trailed 14-10 at the break and 19-13 into the final quarter, but carved out a superb try for replacement Kieran Hardy before the final drama unfolded.

Delaney added: “In the second half I thought we moved the ball a little wider on the edge. We never go that going in the first half and we were pretty harsh on ourselves at half-time. That try in the middle of the field, Rob Evans’s pass to put Kieran away was outstanding. That is the game we wanted to play. We wanted to move Bath around.

“We knew we couldn’t go at Bath square because they are big and physical and are good players. We had to move them around, we saw a bit of the Scarlets way coming out and the DNA of the club, the boys are happy to be taking the rag doll home.

Looking forward to the latest clash with French giants Toulon on Friday night, Delaney added: “We have a few sore bodies, we took a few knocks, so we will have to circle the wagons on those guys.”

Asked about ‘work-ons’ that will be needed before the round two clash, he said: “The one work-on I would love is working on to get people into our stadium. It was great to have fans here for this game, but we want our fans back in the stadium as soon as we can please because these are their nights. The European campaigns are massive for our club and the travelling support is enormous, that is the heartbeat for us. We just want them back in our stadium.”