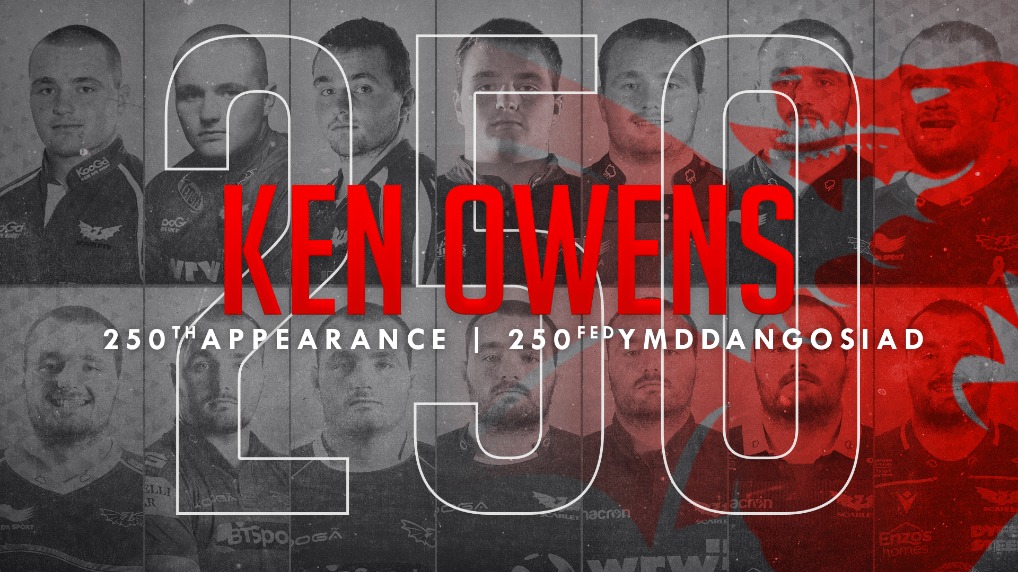 It’s August 11th 2006, Scarlets have travelled to the East Midlands for a pre-season friendly at Northampton’s Franklin’s Gardens and a fresh-faced hooker from Carmarthen is pulling on the jersey for the first time.

Ken Owens had already represented Wales through the age grades so the then coach Phil Davies knew he had a kid with plenty of potential on his hands.

Little would anyone have known that those inauspicious surroundings would provide the launchpad for an incredible rugby journey for the man now popularly known as ‘The Sheriff’.

Packing down alongside Ken in the Scarlets line-up that day was a player at the other end of the age spectrum, prop John Davies; Dwayne Peel captained the side from scrum-half and was part of an exciting back division that included All Black Regan King, Dafydd James and Garan Evans. A certain Carlos Spencer was in the opposition ranks.

That season, Ken was part of an all-singing, all-dancing Scarlets squad that reached the semi-finals of the Heineken Cup only to be denied by Leicester Tigers at the Walkers Stadium. Since then, there has been a rollercoaster ride of epic victories and numbing defeats across the continent, including another European semi-final in Dublin two years ago.

The quarter-final win over La Rochelle in the same year undoubtedly stands out as one of the highlights when Ken is asked about the memories to savour; lifting the Guinness PRO12 trophy on the winner’s podium at the Aviva Stadium in Dublin is another that will live long in the memory.

It will also be hard to forget that man-of-the-match display as an emergency No. 8 against the Tigers.

This afternoon in Newport, there may not be any fans in Rodney Parade to give Ken the ovation he deserves on his 250th appearance for the Scarlets, but you can guarantee there will be plenty across the country raising a glass to one of Welsh rugby finest servants and a Scarlet who will undoubtedly be remembered as one of the greats.

One-club stalwarts are a rare breed in the modern professional game, but once the embers of this Covid-affected campaign have burnt out, Ken, now 33, will be quickly turning his attention to a 15th season as a Scarlet and a record-breaking seventh successive campaign as captain.

“When it’s taken from you, as it was with Covid in lockdown, it makes you appreciate what you’ve got a little bit more,” said Ken, speaking during a break from training ahead of this afternoon’s clash with the Dragons.

“I would love to play at the top end of the game as long as I can.

“My mindset now is not about when I’m going to finish, but enjoying the years I have got left.

“It’s a long time ago since my first appearance up in Northampton, but I remember it as if it was yesterday. I was put through the boards by Carlos Spencer and given a bit of an education!”

Another international hooker Sean Fitzpatrick, now a Scarlets board member, was in Llanelli recently to chat to Ken, with the pair joking about who had the most appearances to their name.

The former All Blacks captain played 347 ‘first-class’ games in all. When you add up 77 Wales caps, six appearances for the British & Irish Lions, the odd uncapped game and a Barbarians run-out, Ken isn’t far away.

So what’s been the secret?

“I’m not really sure to be honest with you,” he smiles.

“It’s probably just trying to enjoy the game as much as I can.

“As sadistic as it sounds, I’m quite a grumpy person and that gets me through!

“It’s just having a good bunch of boys to come into work with every day.

“The majority of us are from West Wales and we have grown up together.

“I just want to keep playing, hopefully at the top level, but if that’s not the case, then I will just keep trying to enjoy my rugby at whatever level I am playing at and supporting the boys around me as much as I can.

“Perhaps I’m getting a bit philosophical in my old age, but that’s where I am at the moment, taking it day by day and keeping enjoying it.

“Next thing you know, I am still going at 50 like John Davies and they are having to drag me off the field!”