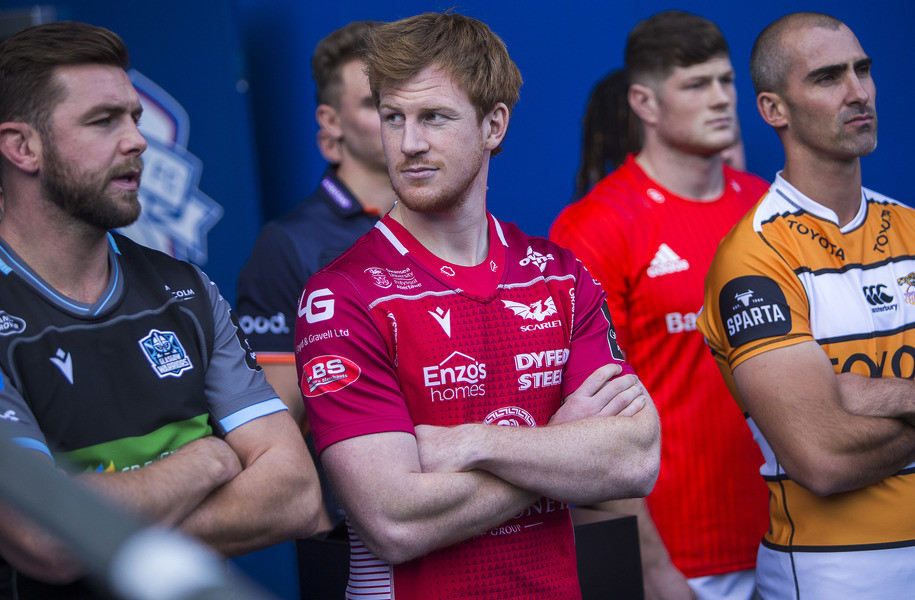 Rhys Patchell was back in a Scarlets jersey this week, albeit temporarily as he begins his recovery from shoulder surgery.

The Wales fly-half was representing the Scarlets at the Guinness PRO14 media day at the Cardiff City Stadium – the venue for this season’s Championship final on June 20.

Despite the obvious frustration of his injury setback, Rhys was in good spirits as he spoke to the assembled press pack.

And it is clear his outlook is very much glass half-full.

“It’s been a week and a bit since getting the shoulder fixed so once the physio has given me the all go and I am a bit more functional I will be ripping back into it and trying to get back onto the training field and helping out,” he said.

“On the Scarlets Whatsapp group and stuff, everyone has been keeping track of each other, rather than being two divided squads over the course of the World Cup. The boys have been asking how things have been going and the boys at home knew we were supporting them as well.

“I popped in to Parc y Scarlets before the London Irish game just to say hello and remind people I was still a Scarlets player! There were smiles on faces and boys enjoying themselves. That is what it’s all about.”

So how has progress been since the operation?

“The frustrating thing is I can’t drive at the moment so I am heavily reliant on friends and family and I am very grateful to them,” added Rhys.

“Injuries are an occupational hazard, aren’t they?  It is not the first time and I suppose the more it happens the more philosophical you become.

“I have done plenty of shoulder rehab over the years as well as prehab to try avoid these situations, but unfortunately when you have big forces going against each other something inevitably gives.”

Rhys is likely to be out of action for between 12 and 16 weeks.

“It’s going to be three or four months. With these things, if you try and push it too early and you get bitten at the tail end of it. If you try and get back too early and you are not ready, not only do you do you a disservice, you are doing the medics, the rest of your team and your coaches a disservice because you can’t perform at the standard or level you want to be performing at.

“It will be ready when it’s ready.”

The shoulder injury happened during Wales’ bronze medal match defeat to New Zealand with Rhys having played an integral role in the side reaching the semi-finals in Japan.

Asked for his reflections on the tournament, he added: “It was pretty cool wasn’t it? It was one of the most rewarding and desperately disappointing eight weeks of my career.

“But to after reaching the semi and at the end of it turn around with my cap to Mam and Dad and say, you know what, in the grand scheme of things it has all been worth it and give them the cap, that is something I value more than the win-loss column.

“Winning is important, but to be able to do that for the people that invest time and effort into you and see you at your best and your worst – more at your worst than your best – to see how satisfied they were that I managed to achieve something, that really gives you satisfaction.”