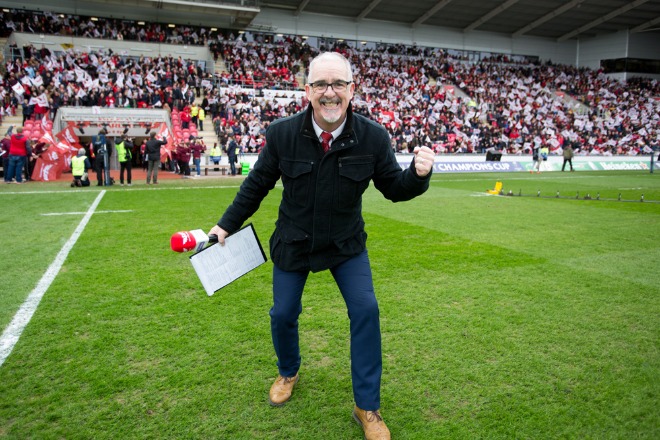 Tributes have poured in following the news that popular Scarlets match-day announcer Andrew ‘Tommo’ Thomas has passed away at the age of 53.

Tommo was a huge character at Parc y Scarlets on match-day, bringing his infectious personality to the mic.

Scarlets head coach Glenn Delaney said: “This is desperately sad news. Tommo will be greatly missed by us all. I’ll miss his smile, energy and passion. Gone too soon, much love to his family at this terrible time.”

Attack coach Richard Whiffin tweeted: “Incredibly sad news. Tommo will be greatly missed by us all. Will miss his match day hugs! Love to his friends & family at this terrible time.”

Tommo was hugely popular with Scarlets players who posted tributes on their own personal social media pages.

Springbok Uzair Cassiem said: “Devastated by the news of your passing! Always got the biggest smile, big handshake before and after games! To the family and friends of Andrew Tommo Thomas, condolences from my family and myself.

Wales prop Rob Evans said: “Really sad to hear the news about Tommo tonight. Thoughts are with his family, a great man full of laughs.”

Former Scarlets captain Rupert Moon said: “Lost a great friend @TOMMORADIO …… my brother by another mother. Thoughts with his family & all his many friends. Sleep well buddy. Big boys do cry.”

Another ex-Scarlets skipper Matthew Rees said: “Can’t believe the news coming from west tonight. Tommo you were a true gent. PYS will never be the same!!”

Former Scarlets full-back Morgan Stoddart said: “Hearing of the passing of @TOMMORADIO, dreadful news. What a great man. He brought laughter to any room he entered. Will be remembered and missed. #TrueScarlet

Title-winning Ireland lock Tadhg Beirne, now with Munster, said: “Very sad news to hear of the passing of Tommo. An absolute gentleman, a passionate Welshman, and a true Scarlet.”

Among the other former players to pay their tributes were Kieron Fonotia, Michael Tagicakibau, Ryan Lamb, Rhys Thomas and Gareth Maule, while messages of condolence came from Cardiff Blues, Dragons and Ospreys,

Tommo was also a popular radio presenter. He had been with BBC Radio Cymru between 2014 and 2018. He then left to present a daily program on Nation Broadcasting station. In 2011 he won the Radio Presenter of the Year award for his work on Nation stations in Carmarthenshire and Ceredigion.

Rhuanedd Richards, Editor of BBC Radio Cymru, said: “Tommo was proud of his roots and a unique broadcaster who loved to entertain his audience on Radio Cymru. With his powerful voice and larger than life personality, his love for his family, west Wales and of course the Scarlets were a great influence on his broadcasting.”