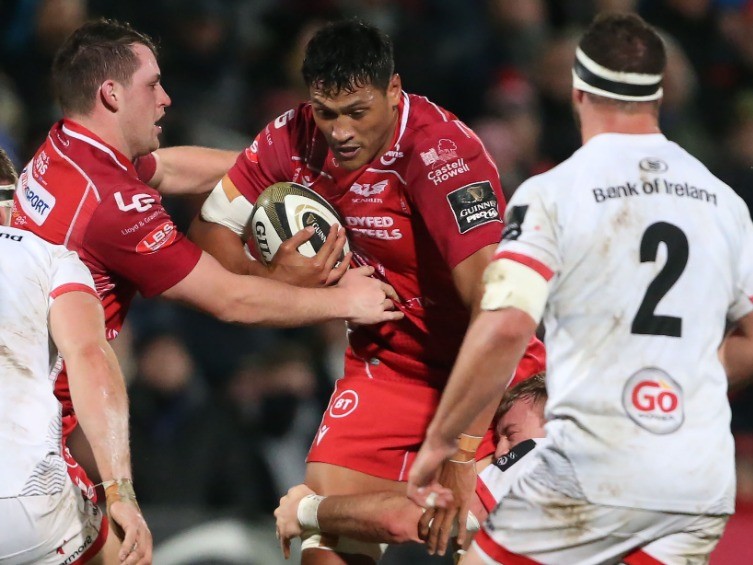 As he settles into life in West Wales, Sam Lousi is looking forward to his first taste of European action in the south of France this weekend.

After featuring in all of Tonga’s matches during the Rugby World Cup in Japan, Lousi has linked up with his new side in Llanelli and made his Scarlets debut in the Guinness PRO14 defeat to Ulster in Belfast last time out.

The 6ft 6in second row is line to feature in the round three Challenge Cup tie against Bayonne at the Stade Jean-Dauger on Saturday evening as the Scarlets continue their quest to qualify from Pool 2 of the competition.

And he’s looking forward to getting stuck into a heavyweight home side.

“We have looked at Bayonne and we know they have a big pack; I am just looking forward to getting out there with the boys,” he told the media ahead of Saturday’s clash.

“It was a tough game against Ulster last weekend, but the boys are excited about going over to Bayonne.

“If we go out there and compete, stick to our structure and do what the coaches want of us, hopefully we will get the result we want.”

And there lies his mantra as a player.

“I enjoy getting the ball in my hands, but I will do whatever the team needs me to do, whether it is to look for the off-load or truck it up.

“I suppose I see myself as the type of player who will give whatever I can for the team.”

So how has life been since his arrival?

“This is a good club, everyone has been really welcoming for me and my family,” he added.

“We are staying just down the road from the stadium and Blade (Thomson), who I played with at the Hurricanes, and his family have been a big help in helping us settle in.

“I’d say adjusting to the weather has been the biggest challenge, back home it is cold, but not this cold!”

Born in Auckland, Sam played rugby league for the New Zealand Warriors before converting to union in 2015.

He played Super Rugby for the Waratahs in Australia and then the Wellington-based Hurricanes.

Sam made his debut for Tonga in the summer in a mudbath against Samoa in Apia and went on to play in all four pool matches for the islanders – against England, Argentina, France and USA – at the World Cup.

Reflecting on the tournament, he said: “Looking back, it was a pretty cool experience, Japan was a great place, very friendly, very welcoming. As a team we had a few struggles, but it is something I won’t forget and will always cherish.”