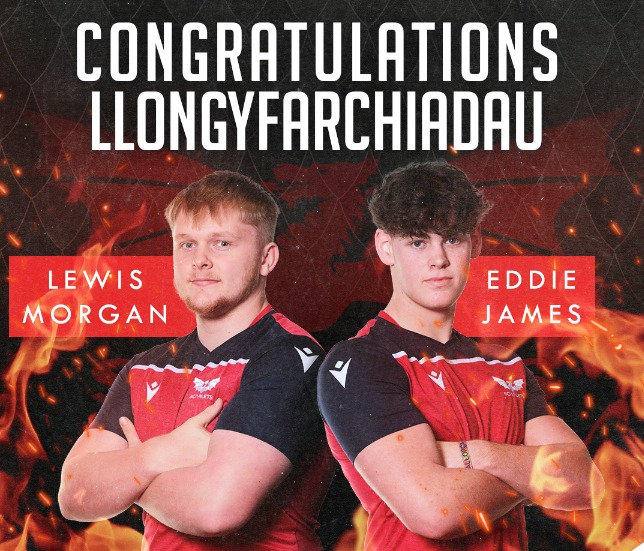 Two more talented home-grown products have been signed up by the Scarlets Academy.

Hooker Lewis Morgan and centre Eddie James are currently training with the Academy at Parc y Scarlets and are being seen as players with a bright future in the game.

Lewis has been a standout player since he came into the Scarlets’ U16s programme. A former pupil of Ysgol Dyffryn Taf, Lewis played his junior rugby with Tenby RFC. He enjoyed an excellent season with Coleg Sir Gar and Scarlets U18s and was rewarded with a place in the Wales U18s squad. The 17-year-old, who stands at 178cm and 111kg, has been selected as Coleg Sir Gar captain.

Academy skills coach Emyr Phillips said: “Lewis has a huge physical presence for his age. He is a powerful ball-carrier, an aggressive defender and has very good set piece skills. He has shown great commitment since joining the academy and has been rewarded with the captaincy at Sir Gar.”

Eddie was a pupil at Ysgol Gyfun Gymraeg Bro Myrddin and moved to Coleg Sir Gar where he represented the college in the U18 National College League. Eddie played mini, junior and youth rugby for Carmarthen Quins RFC and also represented Carmarthen Schools U15s. He was a prominent figure in the College League and was a standout performer for the Scarlets U18s in the Regional Age Grade competition.

Eddie represented Wales U18s against Scotland pre-lockdown and was heading towards further international honours before the season was cut short.

Academy skills coach Paul Fisher said: “Eddie is a physical centre standing at 193cm and 103kg who has the ability to carry over the gainline with subtle offloads. As a former fly-half in his junior days he can distribute accurately off both hands and kick the ball a long way. With his impressive stature he has developed a physicality and appetite for defence and is a real presence in midfield.”