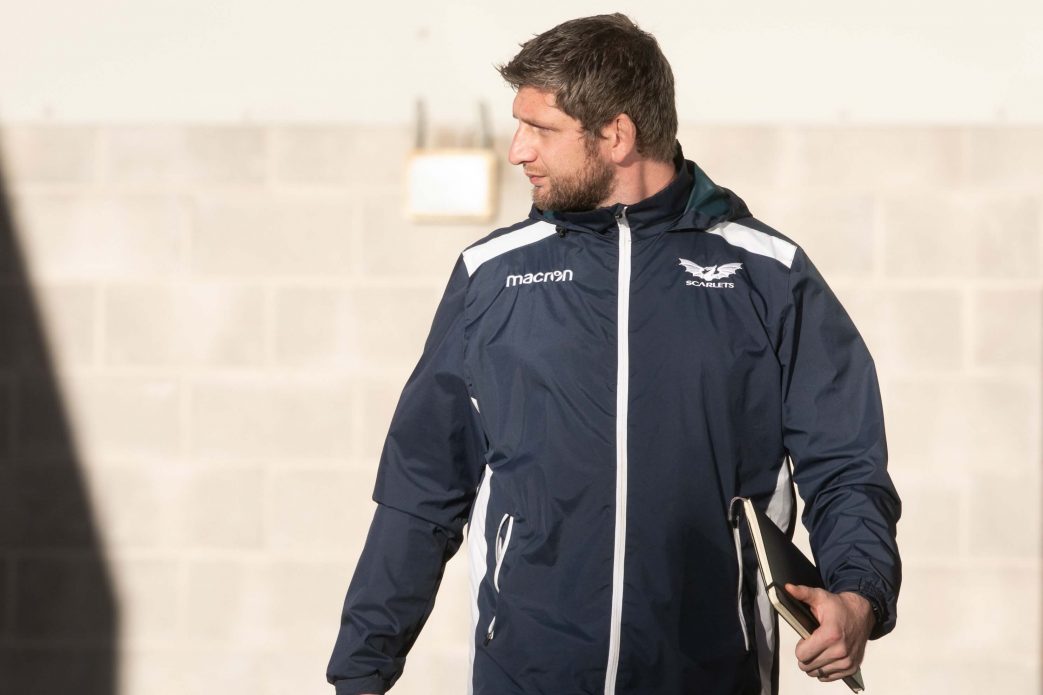 Scarlets can confirm their new coaching team with Richard Kelly promoted to Forwards coach from the Academy and former All Blacks prop Ben Franks appointed as scrum coach.

Richard Kelly has been part of the Scarlets coaching system since retiring as a player in 2015. He was head coach of Welsh Premiership side Carmarthen Quins for two seasons and has also been at the helm of the Scarlets A team who have been the leading Welsh side in the last two Celtic Cup campaigns. The former second row has been forwards coach for Wales U20s for the last 18 months. Kelly will be forwards coach in the senior set-up.

Franks won 47 Tests for New Zealand and was a two-time World Cup winner during an illustrious playing career. He was also a member of the Crusaders squad that claimed Super Rugby titles in 2006 and 2008.

In 2015, he headed to the northern hemisphere to join London Irish where he was coached by Delaney. The 36-year-old has been at Northampton Saints for the last two seasons and in February announced his retirement from playing.

Richard Whiffin joined the Scarlets as assistant attack coach last summer. He has had previous roles at London Irish, as head of the Gloucester Academy and with England U20s.

Dai Flanagan continues in his role as backs coach.

Delaney, who joined the Scarlets in the summer as defence coach, was appointed Scarlets’ new head coach following the decision by Brad Mooar to return to New Zealand to take up a post with the All Blacks.

“Rich is highly respected and has coached in our system for a number of seasons. He has been instrumental in the growth of our young players, a number of whom are stepping up to the senior squad for the coming season.”

He said: “I am delighted to bring Rich Kelly into the senior coaching team after the work he has done with the Academy, A side and the Wales U20s and also to welcome someone of Ben’s calibre to the Scarlets. Both bring a broad skillset to the group along with their detailed set-piece expertise and I am looking forward to seeing them add to our programme.

“Rich is highly respected and has coached in our system for a number of seasons. He has been instrumental in the growth of our young players, a number of whom are stepping up to the senior squad for the coming season.

“Ben’s playing record speaks for itself. He is a double World Cup winner and has close to 50 caps for the All Blacks. I know him well from my days with my original club Linwood back in New Zealand and also with Irish and he is the ultimate professional. He started his senior coaching journey as a player coach with London Irish and has continued to coach club rugby outside of his playing commitments.

“As a group we are excited about coming together when rugby resumes following this lockdown period. We are all looking forward to building on what Brad has put in place this season.”

“I feel very lucky and humbled to be given the opportunity to coach such a prestigious team, The Scarlets have a huge stature in the world of rugby and I’m looking forward to helping the team work towards achieving success.

“My current role has allowed me to get to know the players well, working with primarily the development players in the senior group, but allowing me to build strong relationships with the wider squad too. I’m looking forward to strengthening those relationships next season.

“I would like to thank Brad and Ioan for their work last year and wish them well with the next steps in their journeys. I was lucky enough to have some excellent support from them last season.

“I’m excited to work with Glenn and the new coaching group. There is a real energy and excitement around what we are planning and we can’t wait to get into it and get moving.”

Ben Franks, who will join the Scarlets at the end of his current Saints contract, said …

“Coaching is something I had always planned to do when I finished playing and I was delighted when this opportunity came with the Scarlets.

“I had always known I was going to retire this season so before the coronavirus I had planned on taking some time off, doing some travelling and upskilling. Glenn then got in touch and it’s an opportunity I’m excited to be taking.

“I have learned a lot from previous coaches and from playing over here for the last four or five years and I’m excited to be working alongside Glenn and the other coaches, who I’m sure will push me and help me develop as a coach.

“There is a great mix of experienced internationals and youth in the squad at the Scarlets. I’m looking forward to linking up with everyone.”