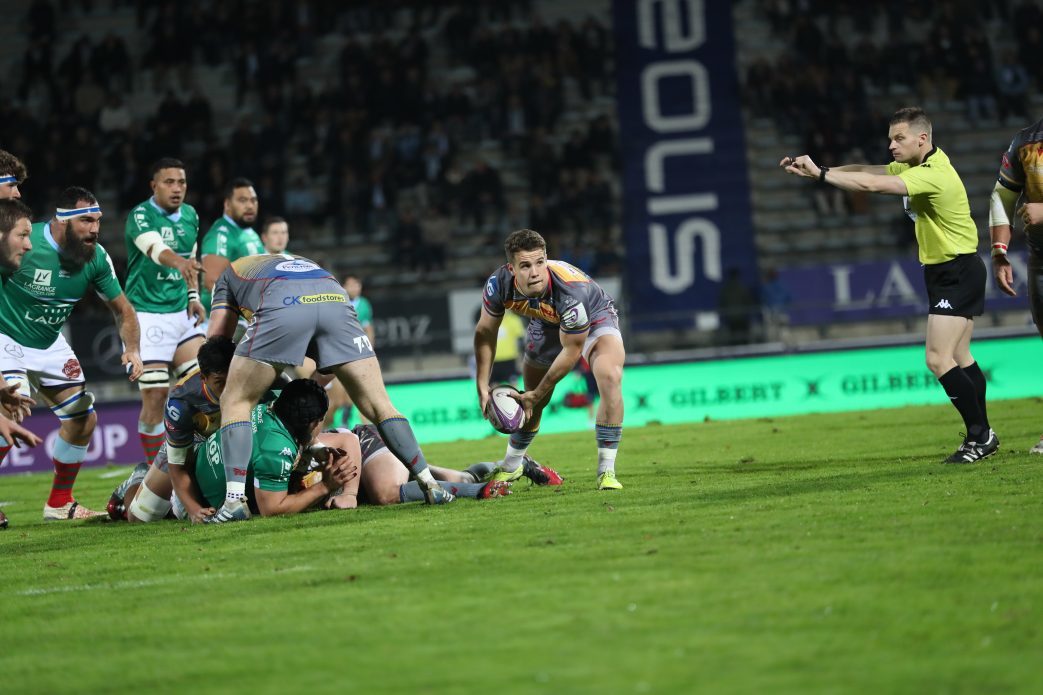 The Scarlets celebrated their first win on French soil since 2014 after seeing off the challenge of Bayonne 19-11 at the Stade Jean-Dauger.

Cheered on by a vocal travelling support of more than 300 fans, the Scarlets again dug deep for a win that keeps them firmly in the hunt for qualification from Pool 2 of the European Challenge Cup.

A try from prop Rob Evans and 14 points from the unerring boot of full-back Leigh Halfpenny was enough to keep the French side at bay, ensuring the Scarlets remain hot on the tail of pool leaders Toulon after three rounds.

Evans was part of an outstanding forward effort with the Scarlets going toe to toe with a juggernaut home eight.

Making his first appearance of the season, Halfpenny also oozed class, enjoying a 100 percent success rate at goal as well as producing a superb all-round display.

After a frantic opening, it was the trusty boot of the Wales full-back that opened the scoring on 11 minutes.

The home side levelled through fly-half Romain Barthelemy before the Scarlets struck for the game’s first try.

A clever line-out catch and drive was held up over the line, but after having a second go, the Scarlets found a way over the whitewash through the impressive Evans.

Halfpenny converted, but moments later, the home crowd were celebrating when scrum-half Michael Ruru broke clear and gathered his own chip ahead.

With back-rowers Uzair Cassiem and Blade Thomson putting in huge shifts, Scarlets went close on a couple of occasions, but had to wait until the final minute of the half to extend their lead when Halfpenny landed another penalty following a high hit on hooker Ryan Elias – a challenge that saw Bayonne No. 8 Sione Tau sent to the naughty step for 10 minutes.

Further pressure saw Halfpenny extend the Scarlets lead to 16-8 10 minutes after the restart, but moments later that was cancelled out by another Barthelemy strike.

A superb break from Johnny McNicholl and some slick hands almost led to a second Scarlets’ try, but a penalty followed and Halfpenny made no mistake from close-range to push the Scarlets more than one score ahead at 19-11.

With discipline letting the hosts down badly, Bayonne were reduced to 14 men again when centre Yan Lestrade was shown yellow for a deliberate knock-on.

And although the home side tried to get back into the contest, the Scarlets held firm to claim their first victory in France since the triumph over Racing in January, 2014.

Both sides meet in the return at Parc y Scarlets on Saturday, kicking off at 7.45pm.