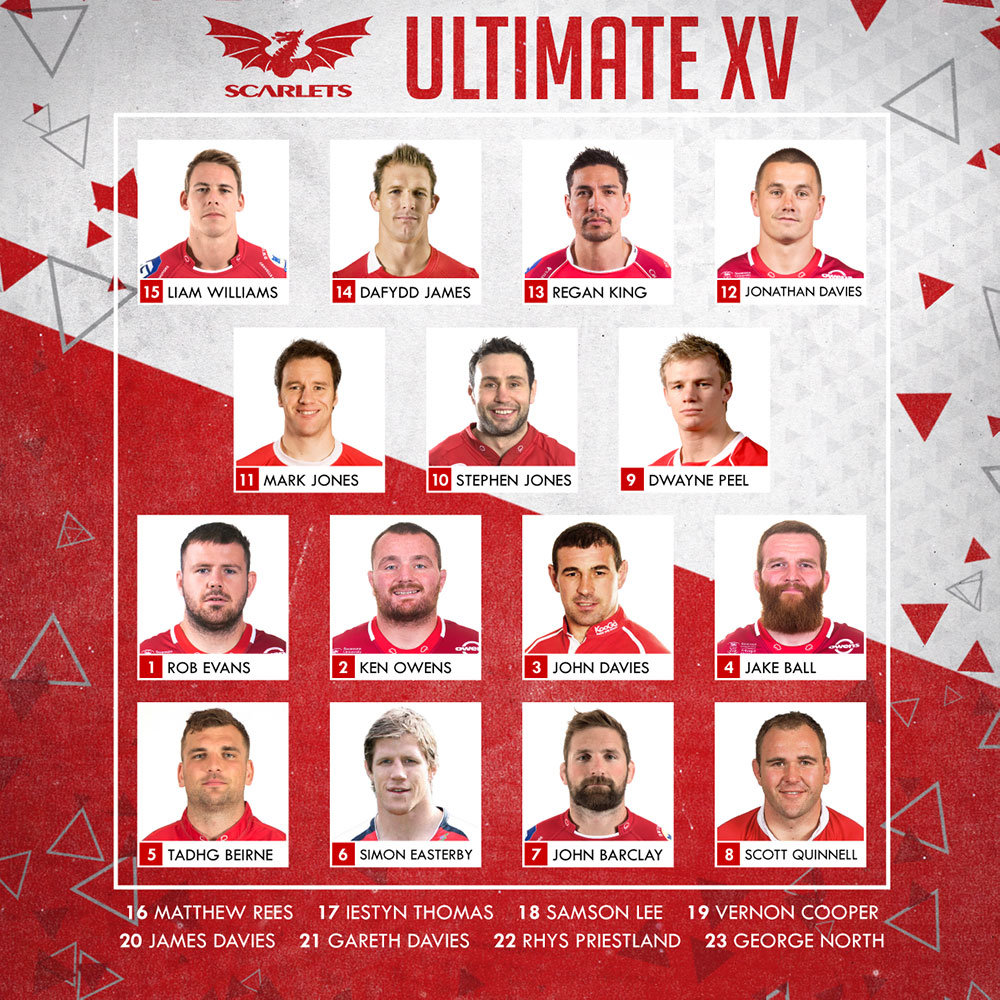 Over the last three weeks we’ve been asking Scarlets fans to select their Ultimate XV of the regional era and what a side has been picked.

The bench has been picked from the best runners up from the 15 polls and there are another two Lions waiting among the replacements.

A member of the current squad, Rob was part of the title-winning team of 2016-17. A seasoned campaigner and a regular on the international stage, the Pembrokeshire product made his Scarlets debut back in 2013. Rob edged out Iestyn Thomas in the voting.

Our current captain has close to 250 appearances in a Scarlets jersey and is widely regarded as one of the most respected hookers in world rugby. Made his debut in 2006 and is now in his 14th season with the Scarlets. An overwhelming winner of this vote.

John played both sides of the scrum at Stradey Park but it is at tight-head where he proved the most effective in a pack that stood toe to toe with the best in Europe. The popular West Walian made 256 appearances in a Scarlets jersey over nine seasons.

This was a tight contest between the current Wales lock and former captain Vernon Cooper. But it was Jake who got the nod with 53% of the vote. A powerful carrier, Jake has played 120 times for the Scarlets since arriving from Australia in 2012.

A relatively low-key signing from Leinster, Tadhg became one of the stars of European rugby, building a reputation as an athletic line-out forward who was outstanding in turning over the ball at the breakdown. Another close vote between the Ireland international and former Stradey favourite Chris Wyatt.

In a high-quality field, the former club captain and head coach came out on top with 46% of the vote. A dogged competitor who could play across the back row, the Ireland international enjoyed 11 seasons playing for the Scarlets before heading into coaching.

The Scotland international proved a huge hit during his five seasons in West Wales. Played across the back row and in the absence of the injured Ken Owens, led the Scarlets to their Guinness PRO12 title victory in 2017. Won the vote ahead of his former back-row colleague James Davies.

SQ was a force of nature at the back of the Scarlets scrum, becoming one of the most destructive ball-carrying back-rowers in the game. Part of the title-winning side of 2003-04, he played 179 times over 12 seasons and also captained the club. Untouchable in this poll with 90% of the vote.

The Wales and British & Irish Lions Test scrum-half saw off the all-international challenge of Gareth Davies and old foe Mike Phillips to land the No. 9 jersey with 58% of the vote. Played 151 matches over nine and was instrumental in the title-winning side of 2003-04 and the team that romped to the 2006-07 Heineken Cup semi-finals.

The Scarlets’ record points-scorer was the overwhelming choice in this poll with more votes than any other player (1102) across the three weeks. In all, ‘Stevo’ played 315 matches between his debut in 1996 and when he finished his playing days with the Scarlets in 2016. One of the all-time greats.

There was stiff competition for this one, but it was the Builth Wells Express who was first past the post in this list of flyers. A devastating finisher who scored 83 tries in 163 matches, a record of one every two games.

A twice British & Irish Lion, ‘Foxy’ is widely regarded as one of the leading centres of his generation. Has played 158 games for the Scarlets sandwiching a spell in France with Clermont Auvergne. A key weapon in the 2016-17 PRO12 title triumph.

The classy Kiwi arrived unheralded in West Wales in 2005 but was to become a Scarlets icon. A magician with ball in hand, he mesmerised opposition defences with his sleight of hand and eye for a gap. Played 185 matches in two spells and was named one of the best players in European rugby during the march to the 2007 Heineken Cup semi-finals.

With the ability to operate on both wings and in the centre, James was a potent weapon for the Scarlets, particularly in Europe, where he remains one of the competition’s leading try-scorers. A Test Lion in Australia in 2001, James played 124 matches in a Scarlets jersey.

The man popularly known as Sanjay could easily have been part of the wing vote, but it is at full-back where he produced his most dazzling rugby for the Scarlets. Brave in defence, the self-proclaimed ‘bomb-defuser’ was imperious in the air and a huge threat on the counter attack. A Scarlets Lion in 2015, he has returned to Llanelli following a spell at Saracens.

The poll was set up in association with Doopoll