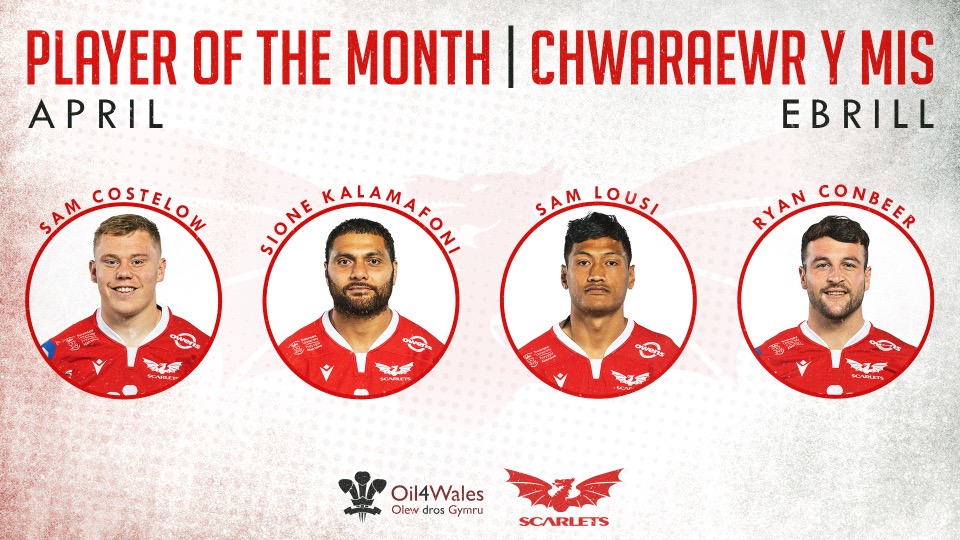 It’s time to vote for your Oil 4 Wales Scarlets Player of the Month for April.

It’s been a month packed full of Welsh derbies, which has produced a mixed bag of results for Dwayne Peel’s side.

It started impressively with the double over Cardiff, followed by a defeat and win against the Dragons and then last weekend’s loss in Swansea to the Ospreys.

There have been plenty of standout candidates, these are the four up for this month’s vote.

A towering presence at the heart of the Scarlets side, Sam has produced a string of outstanding performances from the second row. Missed the home loss to the Dragons, but returned with a player-of-the-match display at Rodney Parade.

RYAN CONBEER
Celebrated the birth of his baby daughter with a blistering hat-trick of tries against the Ospreys making him a potential bolter for Wales selection this summer.

Ultra-consistent, the Tongan No. 8 currently leads the URC stats in carries and is third for successful carries and second for tackles made. Is enjoying another phenomenal campaign.

Scored an outstanding solo try in the home win over Cardiff and produced another eye-catching display against the Ospreys, constantly threatening the defensive line. Has grown impressively into the No. 10 jersey.