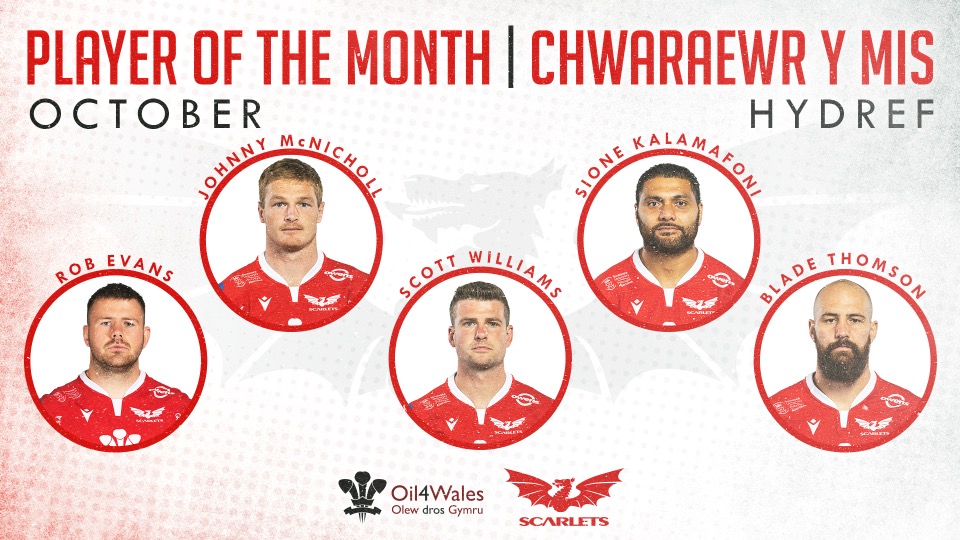 With the opening block of United Rugby Championship fixtures completed, it’s time to vote for your Oil 4 Wales Scarlets supporters player of the month.

The October award takes in all five matches against Edinburgh, Emirates Lions, Munster, Leinster and Benetton and includes a number of standout individual performances.

Here are the contenders

The experienced centre has returned to the Scarlets with a bang and delivered a player-of-the-match display against Benetton, setting up a try double for Dane Blacker, which earned Scott a recall to the national squad this autumn.

A regular on this list, Scarlets’ Mr Consistent was outstanding in the opening two matches against Edinburgh and the Lions with his ball-carrying dynamism against the South Africans earning him the player-of-the-match accolade.

The Wales international prop has been at the heart of the Scarlets’ forward effort, featuring in all five matches and crossing for close-range tries against the Lions and Benetton. Has also been showcasing his renowned handling skills.

J-Mac has been one of the leading attackers in the URC so far, third in the list of metres gained and joint fourth in off-loads. Also pouched tries against Edinburgh, Munster and Leinster and took that form into Wales’ Autumn Series opener against the All Blacks.

Has been a go-to player in the opening rounds, with and without the ball. One of the Championship’s top tacklers, Blade has also bagged himself seven turnovers, with only Cardiff’s Will Boyde above him.

You can vote for your Oil 4 Wales player of the month by clicking on the form here.

The winner will be announced on Wednesday!